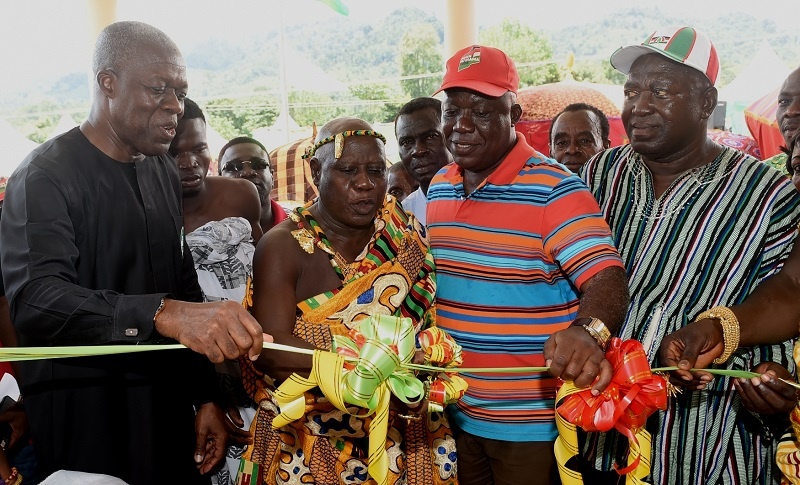 On the second day of his campaign tour of the Brong Ahafo Region, Vice President Kwesi Amissah-Arthur inaugurated an 80 thousand Ghana cedi girls’ dormitory with a capacity for more than 500 students for the Yeboah Asuamah Senior High School (SHS) in Nsuta.

He also inaugurated a similar facility in Tanoso all in the Techiman Municipality.

Addressing mini rallies in Nsuta and Tanoso, Mr. Amissah-Arthur hinted that the next NDC government will upgrade the Sunyani and Techiman municipalities to metropolitan status.

Mr. Amissah-Arthur begun the day, with a courtesy call on the chief of Sunyani, Nana Bosoma Aso Nkrawiri at his palace.

Nana Bosoma Aso Nkrawiri expressed gratitude to the NDC government for providing the Brong Ahafo Region with its fair share of the national cake.

He said God has already chosen the next president and called for peaceful polls.

Mr. Amissah-Arthur urged the chief and his elders to continuously pray for President Mahama as he seeks re-election for another four year mandate.

He said the prayers should also be extended to the flagbearers of the other political parties so that the campaign message will be dominated by peace and development.

At Nsuta and Tanoso, the chiefs were grateful to President Mahama for providing their communities with schools and other infrastructure projects. They therefore endorsed his second term bid.

The Kyidomhene of the Techiman Traditional Area, Oyeadieyie Aso Akompani emphasised the importance of education, saying it is best legacy a government can provide to the people.

Addressing enthusiastic NDC supporters at Nsuta and Tanoso in Techiman South and Seikwa in Tain constituencies, Mr Amissah-Arthur urged the supporters to carry the campaign to their remote communities and also talk to the floating voters to vote for President Mahama and the parliamentary candidates.

He advised them to restrain themselves from all forms of provocation and go out in their numbers on December 7 and vote massively for the NDC.

The General Secretary of the NDC, Johnson Asiedu Nketsia warned supporters of the NDC to stay away from any form of violence as the party is determined not to condone it.

He said any supporter caught will be handed over to the police for the law to deal with him or her.