The Vice President, Mr K. B. Amissah Arthur, and his team on Friday joined this year’s national Farmers’ Day celebration at Kpone in the Greater Accra Region.

He was originally supposed to be in Bolgatanga in Upper East Region; however due to poor visibility, the Ghana Air Force could not lift him to the Tamale Airport and subsequently continue to Bolgatanga.

At Kpone he congratulated every farmer and fisherman across the country and added that “government acknowledges the enormous potential agriculture has for providing sustainable employment, decent incomes and improved standard of living, as well as contributing to food security. It is for these reasons President John Mahama is calling for the transformation of the structure of the economy.

The Farmers’ Day was instituted by the Provisional National Defense Council(PNDC) government in 1985 in recognition of the vital role farmers and fishers played in the economy especially the highly commendable output of farmers and fishermen in 1984 during which Agriculture contributed to 30percent of the country’s Gross Domestic Product(GDP).

The theme for this year’s celebration is “Transform Ghana: Invest in Agriculture”.

ADDRESS DELIVERED BY VICE PRESIDENT K. B. AMISSAH‐ARTHUR ON THE OCCASION OF THE 31ST
NATIONAL FARMERS’ DAY, BOLGATANGA, FRIDAY 4

It is a pleasure to join you to celebrate the 31st DECEMBER 2015 edition of the event that acknowledges the contribution to national development of our farmers and fishers. It a day we have set aside to celebrate and thank them for their toil and sacrifice.

The theme for this year’s celebration is “Transform Ghana: Invest in Agriculture”. This theme is
linked to one of the central themes of Ghana’s long term National Development Plan: “The
Transformation of the Ghanaian Economy through Accelerated Agriculture Modernisation and
Sustainable Resource Management”. Given its central role, agriculture is expected to drive the
new development agenda. That is the reason it must attract investment from both public and
private sectors.

Government acknowledges the enormous potential agriculture has for providing sustainable
employment, decent incomes and improved standard of living, as well as contributing to food
security. It is for these reasons President John Mahama is calling for the transformation of the
structure of the economy.

To demonstrate our commitment to the transformation agenda, we have already made available
GH¢120 million to the rice, shea, cashew and agro‐processing sub‐sectors to boost production.

Tractors, harvesters and other farm machinery have also been distributed to farmers across the
country. In the first half of 2016, we expect to take delivery of 500 additional tractors and
implements through a Public Private Partnership for onward distribution to farmers.
We have increased the number of Agricultural Mechanisation Services Centres from 57 in 2009 to
89 in 2014. This has resulted in an increase in the total area of farms serviced by these centres, by
56 per cent between 2009 and 2014.

We have undertaken new irrigation projects that have resulted in the increase in the total area of
irrigated land by 6 per cent between 2010 and 2014.

Resulting from these interventions, food crop production increased by 34 per cent between 2008
and 2014. In the area of rice cultivation, for example, local production has more than doubled
since 2008. These interventions have alos been associated with improved food security.

It is not only on the farms. Government is also investing in projects to revamp the fisheries sub‐
sector. We have already completed the construction of modern cold stores at Prampram,
Nyanyano, Shama, Sekondi‐Takoradi, Half Assini and Kormantse. We are also completing six
landing sites with modern facilities including cold stores, market stalls and children’s nurseries at
Mumford, James Town, Teshie, Anloga, Tapa‐Abotoase and Dzemeni. An additional 25 landing
sites are also in the planning stages.

In Elmina, a fish processing plant is under construction whose by‐products will be used for the
production of fish feed to boost aquaculture production.

We are facilitating the acquisition and distribution of 3,000 outboard motors for fishermen
following the distribution of 1,622 since 2010. We have distributed fish finders to fishers to help
them easily locate fish, we have also mounted tracking devices on all industrial trawlers and tuna
vessels to control illegal fishing. Work is progressing steadily on the Fisheries College at
Anomabo.

As a further boost to the agriculture sector, we will, over the next five years, invest GH¢3 billion
in the construction of roads in cocoa‐growing regions. This is intended to not only facilitate the
transport of farm produce to the various market centres and thereby help reduce post‐harvest
losses, but also offer farmers convenience, comfort and more safety on roads. For all their toil
and sacrifice, we believe that our farmers deserve more and we are giving them more to spur
them on to do even better.

We are doing these with the conviction that the agricultural sector has great potential that will
require partnership with a private sector prepared to take advantage of the investment climate
we are creating for the mutually beneficial enterprise.

Naa Chairman,
Despite the significance of the post‐harvest losses that reduce the return to agriculture, we are
aware that on average, the rate of return from investing in agriculture is higher than that of
trading and commerce; yet many people prefer to invest in trade and commerce rather than in
agriculture. This mind‐set must change.

We acknowledge the challenges and the risks in agriculture; over reliance on rainfall, inadequate
mechanisation, low adoption of technology that results from inadequate Agricultural Extension
Agents and.

Government is fully aware of the implications of these challenges on the transformation agenda,
hence the initiation of projects and programmes to address them.

extension services by the use of mobile phones. This is a welcome addition and it is my hope that
our farmers will take full advantage of it.

Let me acknowledge our Development Partners for the goodwill and support for our effort to
reduce poverty through accelerated agricultural production.

We are grateful to all companies, organizations and individuals who generously support the
organization of farmers’ day.

I also want to thank the national, regional and district planning committees for their commitment
in planning and organizing successful celebrations throughout the country. We cannot forget the
officials of the Ministries of Food and Agriculture and Fisheries and Aquaculture Development for
their various roles.

Finally, on behalf of all Ghanaians, I salute all farmers and congratulate the Award Winners of the
2015 National Farmers’ Day. 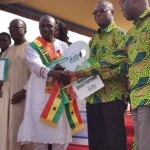