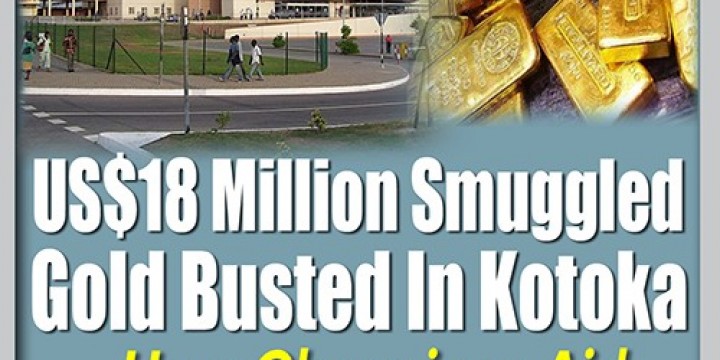 Some dedicated and patriotic customs officials stationed at Kotoka International Airport (KIA) last Wednesday, busted a syndicate attempting to smuggle 12 boxes of gold weighing 480 kilograms and priced at US$18 million out of the country.

The security officers, upon a tipoff impounded the 12 bullion boxes at the cargo section of the airport on its way out of Ghana, without the necessary documentation.

The Indian exporters, through the connivance of some unscrupulous Ghanaians, were flying the US$18 million gold onboard Emirates Airlines without any form of inspection and taxes payable.

The two Indian companies involved in the attempted smuggling were; BGC International and K. K. Enterprises. The names of their Ghanaian collaborating companies were given as A.A. Minerals, Italtec Ghana Limited, and Guldrest Resources. The names of the company owners, office locations and contact address particularly those of the criminally-minded Ghanaians, were not provided.

AA. Minerals, a private Licensed Gold Exporter, whose license is said to expire in June last year, allegedly connived with the Indian gold buyers, to dupe the state.

Available information from the Indian government (Zauba Technologies & Data Services) showed that between January 2014 and January 2016, a total of 101,179 kg of gold valued at US$3,607,415,756.36, was shipped out of Ghana to India alone, without going through the necessary processes.

Insiders told The Herald that, the smuggling of gold by the LGEs is a daily occurrence at the KIA. It was said that the companies do this to avoid paying the appropriate taxes to the state and also to avoid the repatriation of the gold proceeds back into the country. This is goes to put undue pressure on the Cedi.

It was for this reason that, the Bank of Ghana (BoG) last year, came out with the directive to streamline the gold export procedures, for which the LGEs went to court and have been able to secure an injunction against the directive.

The BoG, said it was forced to introduce new rules for gold exports due to the consistent under declaration and smuggling of gold from Ghana. However, the LGE, sued the Central Bank for introducing new measures to streamline the processes for documentation for gold exports.

Per the new measures by the Central Bank, all exports of gold must be done only through the PMMC. However, the gold exporters challenged the appointment of the PMMC as the certifier for gold exports.

PMMC is a limited liability company operating under the Companies’ Code, with the Government of Ghana as the sole shareholder. Per the new rules, Licensed Gold Exporters (LGEs) will also not be permitted to export gold for third parties.

According to the BoG, authentication would also be required of all LGEs, thus the exporters must download Form FEX A4 from the BoG website (www.bog.gov.gh) for completion and submission in connection with gold exports.
The BoG, earlier warned that gold exporters, who failed to comply with the new measures on or after the effective date would not be able to export gold out of Ghana.

It has also been identified that one of the factors contributing to the continues fall of the cedi against some major foreign currencies is as a result of the invasion of some foreigners in the small-scale gold industry, where they buy and export gold without repatriating the money back into the country.

These foreign gold traders, who have illegally entered the mining communities are purchasing gold directly from the small-scale miners and exporting the gold themselves and as a result, denying the country of several millions of dollars annually.

Though the law calls for 80 percent repatriation of money realized from gold exports, these foreigners, most of whom have shops in Ghana, rather keep the foreign currency in their offshore accounts and then use the Cedis realized from their shops to buy more gold for export thus in putting pressure on the few dollars in the system.

Insiders told The Herald that, these foreigners come to Ghana unregistered, and get some Ghanaians to aid their illegal business. They equally do not pay any tax to the government, as nobody monitors them.