When it comes to the endowment of natural resources, nature was not stingy with Africa. We have oil, diamonds, gold, uranium, copper, platinum, timber, bauxite and numerous other resources far too many to mention.

For example the proposed Grand Inga Dam over River Congo in DR Congo has the potential to produce 40,000 MW of electricity that can power most of Africa. The project which is estimated to cost $100 billion, and if completed would be the world’s largest hydroelectric plant is more than twice the power generation of the Three Gorges Dam in China.

In spite of all these wealth and resources, Africa is wallowing in abject poverty, and as much as I agree that some of the causes of this unfortunate situation is the making of Africans themselves, much of the blame must be put at the doorsteps of some western countries, and I will explain.

Apart from the Slave Trade and Colonization, the relationship between the west and Africa has been primarily one of exploitation. International trading agreements with Africa have been unfair to African countries. These agreements have been overly influenced by western big businesses. Such unfair agreements and relationships have allowed individual African officials to get rich while the region sells itself cheaply and develops no infrastructure. The global market also sets a price on most of Africa’s exports and so the higher production cost cannot be recouped.

One will ask why the West is interested in doing this to Africa; there is a saying that the fight for survival justify swindle and theft because in self defence, anything goes. And it is believed that the West is doing all those things because they will collapse if Africa develops since most Western countries do not have natural resources and depend on raw materials from Africa for survival.

It is believed that it is for these reasons why the West has an interest in African countries trying hard to develop. For instance declassified CIA documents provide compelling evidence that the US government had a hand in the overthrow of President Nkrumah in 1966.

According to the documents, on March 11, 1965, almost a year before the coup, William P. Mahoney, the U.S. ambassador to Ghana, participated in a candid discussion in Washington, D.C., with CIA Director John A. McCone and the deputy chief of the CIA’s Africa division.

According to the record of their meeting (Document 251), topic one was the “Coup d’etat Plot, Ghana.” Mahoney was satisfied that popular opinion was running strongly against Nkrumah and the economy of the country was in a precarious state, and was convinced that the coup d’etat, being planned by Acting Police Commissioner Harlley and Generals Otu and Ankrah, would take place.

It is against this background that some people are uncomfortable with some statements made by officials of the British High Commission and the US Embassy in Ghana in connection with a recent clash between some NDC supporters and some NPP gun-wielding thugs near the residence of the NPP’s presidential candidate, Nana Akufo-Addo.

Part of the US statement is as follows: “the United States condemns all political violence in Ghana, especially any violent acts directed at political candidates, their homes or families.”

My worry about this statement is that if indeed the US is against all political violence in Ghana which warranted the issuance of the aforementioned statement, why did they keep quiet when some members of the NPP killed their Upper East Regional chairman, Adams Mahama with acid? Again why didn’t the US Embassy issue a statement when a 37-year-old Abubakar Saddiq was brutally murdered in front of the NPP Asawase Constituency office by NPP activists?

I love the British High Commissioner, Jon Benjamin for being very sociable. I was, therefore, unhappy when a leading member of the NPP, Mr. Maxwell Kofi Jumah called him a fool on NEAT FM’s morning show, “Ghana Munitie”.

But it looks like Jon Benjamin is overstepping his boundaries, and many people are angry with him including Angel Bishop Obinim. What made the Bishop angry, I think, is that after the National Communications Authority took down the Bishop’s TV station, OB TV. Jon Benjamin twittered, “Oh no – Obinim’s TV channel has been taken down? Maybe he can reappear in animal form on discovery channel.”

He didn’t end there, when the Bishop was arrested for publicly flogging two young members of his church for fornication, Jon’s tweet read: “He’s been charged. He’d be much more difficult to handcuff, if he turned into a snake.”

I belief Bishop Obinim has not taken these comments kindly because he told me that he has most times turned into an ant, and have been following the High Commissioner where ever he goes, and that he is going to expose Jon Benjamin for ridiculing him.

Bishop told me to ask Jon whether it is true that he drinks apio and Kakai bitters, and also whether he takes delight in bunking local girls. What surprised me is the revelation by the Angel that Jon has given Yaanom a roadmap for declaring their own results after this year’s elections. I saw myself flying on a broomstick with Angel Obinim. He took me to a tall building to eavesdrop a discussion between Jon Benjamin and Steve Mallory, the Executive Editor of the AfricaWatch magazine. I saw Jon cautioning Mallory for publishing scathing stories about Nana Akufo-Addo.

At this point, I looked down from the tall building, and I started feeling dizzy. I slipped and fell: as I was floating in the air, I screamed for Angel Obinim to save me, but he didn’t mind me. Just as I was about to hit the ground, my eyes opened. I was dreaming!

Folks, Ghana is rising, and some people are not happy for obvious reasons. They are interested in the outcome of this year’s elections, and I believe they are setting the stage for an agenda. The good people of Ghana must shine their eyes. No abaabase! 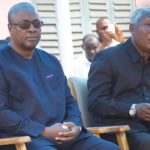