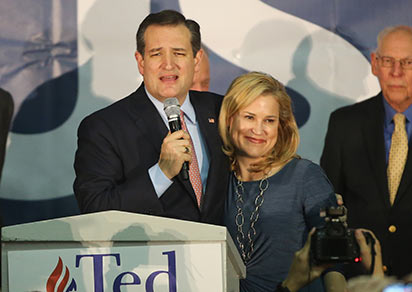 Once reviled by fellow Republicans as a “wacko bird” eager to shut down the US government, Ted Cruz proved with his Iowa win that his arch-conservatism may yet propel him into the White House.

He has spent months seeking to out-maneuver his many rivals.

When he did so Monday night, surging past frontrunner Donald Trump as he rode a wave of enthusiastic support, it appeared to validate — if only for a few fleeting hours before the presidential race resumes — the political positions that have made Cruz such a compelling but controversial figure.

Cruz, who has fought hard to maintain a prominent place for faith in American life, is battling not just for the Republican nomination. He sees himself in a battle for the very soul of the country.

“Tonight is a victory for courageous conservatives across Iowa and all across this great nation,” Cruz said in his caucus victory speech.

“We’re seeing conservatives and evangelicals and libertarians and Reagan Democrats all coming together as one, and that terrifies Washington, DC.”

As a US Senate freshman, the 45-year-old Texan — an intellectual proponent of a grassroots movement that has simmered for years under the Republican mainstream — has barely three years under his belt in national politics.

But in the 2016 presidential race, his outsider status has played well with the right-wing base furious with what he derides as the “mushy middle” GOP establishment unwilling to play hardball against US President Barack Obama.

For Democrats, Cruz is a dangerous demagogue they love to hate.

To religious conservatives, he is a patriot, a thinking man’s champion of the common folk sent to Congress — and perhaps to the White House — to disrupt the ways of the go-along-to-get-along establishment and fulfill the principles of smaller government.

He has since become the movement’s North Star, but critics blast him as a poster boy for Washington gridlock.

Cruz, a master orator with a clear sense of mission, has angered elders in both parties for showing little deference to seniority and snatching the spotlight from more experienced political stalwarts.

He insists government has wrecked the economy, infringed on religious liberty, put constitutional rights “under assault,” overtaxed Americans and sought to take away their guns.

In September 2013, his conservative star power soared when he spoke for 21 hours straight to try to block a stopgap spending bill in the lead up to a crippling shutdown the following month.

Many Republicans blasted Cruz for convincing Tea Party adherents in the House of Representatives to shut down government in a doomed quest to defund Obama’s crowning domestic achievement, the Affordable Care Act.

Cruz’s apparent eagerness to gum up the works led an exasperated John McCain, the 2008 Republican nominee, to deride Cruz and other Tea Party lawmakers as “wacko birds on the right.”

– From Harvard to the Hill –

A Texas-raised, Harvard-educated lawyer with a Cuban father and an American mother, Cruz joined the legal elite when he was accepted as a clerk for US Supreme Court Chief Justice William Rehnquist in 1996.

He returned to Texas and in 2003 was appointed solicitor general, arguing many cases before the Supreme Court in Washington.

In 2012, he ran for the Senate with support from the anti-government, anti-tax Tea Party, defeating the establishment Republican and then steamrolling his Democratic opponent in the election.

Cuban-American Cruz may enjoy plenty of support in Hispanic-heavy Texas, but he is a staunch opponent of immigration reform.

He blasted Obama’s efforts last year to shield millions from deportation as “illegal amnesty,” and feuds with fellow candidate Senator Marco Rubio — whose parents immigrated to the US from Cuba — over who can clamp down harder on illegal immigration.

For millions of conservatives outside the US capital, the staunchly unapologetic Cruz is a hero, and he has fired up the base.

But only Donald Trump, the billionaire real estate tycoon who has refashioned himself as a conservative populist, had stood in Cruz’s way of winning Iowa. Now, the challenge is securing the nomination.

With Trump upending the political playbook and launching personal attacks on his rivals, including Cruz, the Texan pledged not to sink “into the mud” in a battle of insults.

“I think issues and substance, policy and vision and record should be the meat of politics,” he said during Thursday’s Republican debate, which Trump boycotted.

Trump has hammered Cruz over his Canadian birth, suggesting bluntly that Cruz may not be eligible for the presidency.

It has emerged as a point of contention in the campaign, but Cruz insists he is a natural-born citizen.

How will voters know that he is the candidate who will defend life, traditional marriage and religious liberty?