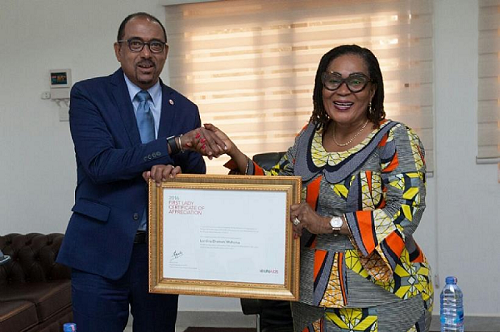 The Executive Director of UNAIDS, Mr Michel Sidibe, has awarded a certificate of appreciation from UNAIDS to a former First Lady, Mrs Lordina Mahama, in recognition of her excellent leadership as the President of the Organisation of African First Ladies Against HIV/AIDS (OAFLA) and her commitment to, and exemplary role in support of the fight against HIV/AIDS in Ghana and Africa.

The UNAIDS Director also commended Mrs Mahama for her commitment as the Premier HIV Ambassador for the UNAIDS Global Plan to “Eliminate Mother-to-Child Transmission of HIV (eMTCT) and Keep Mothers Alive.”

At an impressive ceremony to present the certificate to the former First Lady in Accra, Mr Sidibe said Mrs Mahama had executed her role as President of OAFLA to perfection.

He said under her tenure, the First Lady of China came on board to assist OAFLA in its fight against the HIV and AIDS menace.

The UNAIDS Director said Mrs Mahama also brought the First Lady of Panama on board and due to her hard work and dedication, OAFLA had gained visibility and a number of international partners now assisted the African First Ladies in their quest to end HIV and AIDS on the continent.

“African First Ladies, as members of OAFLA, significantly enhanced the political and leadership commitment to HIV. As a result, UNAIDS considers the First Ladies as critical partners in advancing the national and continental agenda on AIDS,” he said.

For his part, the UNAIDS Country Director, Mr Gerita Haile, commended Mrs Mahama for her hard work and dedication that had contributed greatly to the fight against HIV/AIDS.

He said as a Premier Ambassador, Mrs Mahama spearheaded the Global Plan; “empowering women and girls, challenging stigma, and helping national and community leaders understand that the AIDS response cannot be separated from the work to improve the health of mothers and children.”

Mr Haile said in her capacity as the lead national champion for eMTCT, Mrs Mahama was a charismatic leader who got the country to prioritise eMTCT and progressed towards the attainment of an AIDS-free generation by providing women and girls with better tools to protect themselves from HIV and gender-based violence.

He reaffirmed the belief of UNAIDS that “we must boldly and unapologetically focus on women, girls and young people if we want to pursue our dream of a country and continent free from HIV.”

The former First Lady expressed her appreciation to the UNAIDS for the recognition and added: “I am very touched by the recognition of our work on HIV in Ghana and with OAFLA, my commitment would continue beyond my role as a First Lady.