The British government has sent a peace and goodwill message to Ghanaians as the country votes to elect a new president and members of parliament for the next four years.

In a video message, the British High Commissioner to Ghana, Jon Benjamin, said whoever the victor maybe is entirely in the hands of the people of Ghana.

According to him, the UK has no favourite party and no favourite candidate and is, therefore, entirely neutral.

“We will happily work in the future with whoever wins in a free and fair election,” he stated.

Mr Benjamin added: “The UK government supports an election that is peaceful, transparent, and fair. We expect that win or lose all sides will respect the outcome, or if they do dispute it, they do so only by constitutional meansThere are seven main candidates in the presidential race including President John Mahama of the governing National Democratic Congress (NDC), who is seeking re-election for a second and final four-year term.

His main contender in the race is Nana Akufo-Addo, who is having a third go at the presidency. 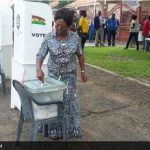