Outspoken British High Commissioner Jon Benjamin says he has received “abusive trolls” on social media in the past week than any other.

The British Ambassador to Togo, Benin and Burkina Faso said the “by far record” abuses on social media have come from Ghana.

He, however, pointed out that the wording of the insults are coincidentally the same. Mr Benjamin disclosed in a tweet on Saturday.

“And of course online/social media trolls are cowards who hide behind anonymous handles so they can’t be identified (or so they think),” he tweeted on Saturday.

A warning by the UK High Commission in Ghana on Monday over the activities of political parties received mixed reactions.

The UK High Commission together with the US Embassy issued the warning, threatening to take stringent measures if political leaders do not call their followers to order, after a clash between supporters Ghana’s two major political parties at the residence of the opposition leader, Nana Addo Dankwa Akufo-Addo.

The warnings attracted a hard response from the ruling National Democratic Congress (NDC), whose communicator Kwadwo Twum Boafo bashed the diplomatic officer on TV3 though he later issued an apology on some of his allegations.

The NDC itself released a statement to take exception to the warnings issued by the two embassies.

But Mr Benjamin seems to have had a fair share of abuses on social media – Twitter especially. 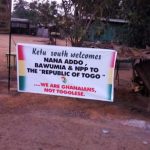