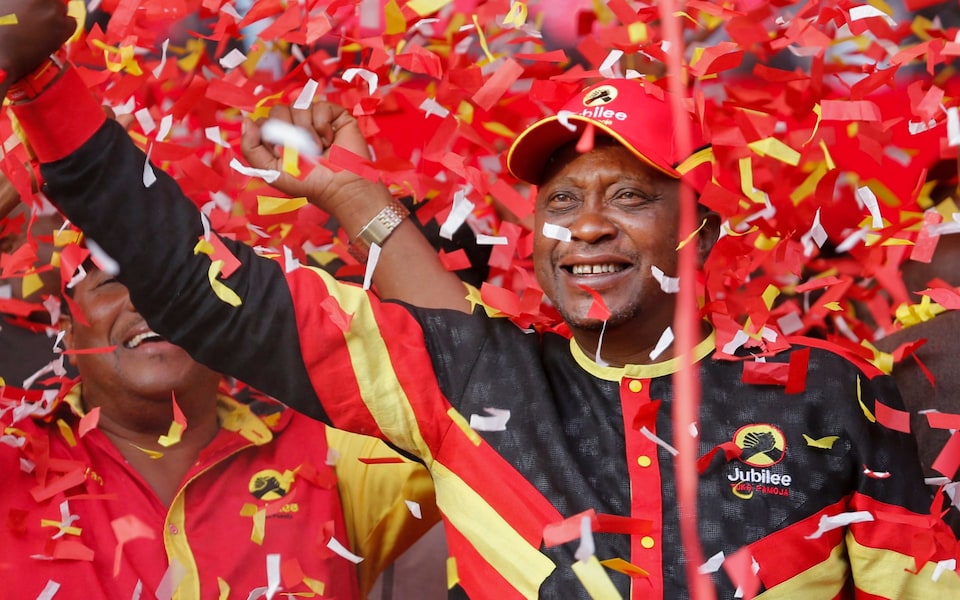 Uhuru Kenyatta has been re-elected as president in Kenya, with final official results giving the incumbent a substantial margin of victory over the veteran opposition politician Raila Odinga.

After an acrimonious campaign, Kenyatta used his re-election speech to reach out to Odinga and supporters on Friday night, saying he wanted to work with them “in the service of Kenya”.

The 55-year-old, in power since 2013, also called on his compatriots to “remember that we are brothers and sisters” and “shun division”.

Fears that protests by opposition supporters could lead to violence were stoked by the last-minute refusal of opposition officials to sign off on the final results of the election in the east African country.

“Every time an election has been stolen … Kenyans have stood up,” he said.

In recent days, opposition officials have described the election results as a fraud and claimed that Raila Odinga, the 72-year-old Nasa leader, was the legitimate winner.

Kenya has endured a tense wait for three days while a definitive count of the results from more than 40,000 polling stations was conducted.

Odinga’s claims of rigging after defeat in the 2007 elections prompted rioting and retaliation by security forces, which tipped the country into its worst crisis for decades. About 1,200 people were killed in a campaign of ethnic violence that followed.

We desperately needed change in Kenya’s politics. And we didn’t get it
Daniel Wesangula
Read more
Most of Kenya has remained calm since the vote, but several people have been shot and killed in clashes between police and opposition supporters in poor neighbourhoods in Nairobi, as well as in the western city of Kisumu

An estimated 180,000 police officers and members of other security forces have been deployed to ensure order.

As supporters celebrated in strongholds around the country, Kenyatta called on Kenyans to “reach out to one another” and “extend a hand of friendship and love”.

“Your neighbour will always be your neighbour and we cannot fight over an election. Let us shun violence and refuse to be used for short-term political gain which can only cause our country pain and grief … We have been neighbours, we are brothers, we are sisters … Kenya belongs to all of us.”

A series of election observers and western officials have called on the losers in the election to accept defeat. John Kerry, the former US secretary of state, called on Kenyan political candidates and parties to stay within the law to resolve any disputes.

“The judicial process, the judicial system of Kenya and the election laws themselves make full and adequate provision for accountability in this election,” said Kerry, an election observer for the Carter Center. “The streets do not.”

Opposition politicians on Friday accused the observers of “rushing to judgment” and collusion with the government.

People in hi-vis jackets shuffle paper
Facebook Twitter Pinterest
Election officials from the EU and African Union gather to follow counting by members of the Independent Electoral and Boundaries Commission in Nairobi. Photograph: Anadolu Agency/Getty Images
Odinga, a polarising figure who is adored by his supporters, also ran and lost in 2013, and took his complaints about the widespread failure of electronic voting equipment to court.

Orengo said they would not seek redress through legal channels again, adding that they had tried once and failed. “Court is not an alternative … We have been there before,” he told reporters.

Many Kenyans say the potential for violence is less now because the country has learned from the traumatic experience of 2007.

However, this year’s campaign was marred by hundreds of violent incidents, including the murder of a high-profile election official.

The head of the European Union delegation, Marietje Schaake, said her team had seen no signs of “centralised or localised manipulation” of the voting process but that there were concerns about the misuse of public funds at local and national levels by all parties.

Kenya goes to the polls in closely contested election – in pictures
View gallery
Odinga supporters interviewed by the Guardian in recent days said their leader had been robbed of victory in the last two elections, but that they would not take to the streets if they believed they had been fairly defeated this time.

Kenyatta said he “extended a hand of friendship to our older brother Odinga and his supporters … and all those in the opposition. We must continue to work together for the welfare of our people and to keep this country united. We reach out to you and your supporters and say that in any competition there are always are winners and losers but in the true democracy that Kenya is, there are no losers.”

There was no immediate reaction from the opposition camp.

Observers see the election as the last showdown of a dynastic rivalry between the families of Kenyatta and Odinga that has lasted more than half a century. The candidates’ fathers, Jomo Kenyatta and Jaramogi Oginga Odinga, went from allies in the struggle for independence from Britain to bitter rivals.

The two candidates belong to two of the country’s main ethnic groups: Kenyatta from the Kikuyu, the largest, and Odinga from the Luo. Both have built coalitions with other influential communities in a country where voting still takes place largely along ethnic lines.

However, there are signs this is changing, with younger, more urban and better-educated voters playing down such identities.