Kenya President, Uhuru Kenyatta, who was the special guest at Ghana’s 59th Independence Day anniversary celebration did not realise that he had been referred to as the President of Ghana in the event brochure, President John Mahama has revealed.

According to Mr. Mahama, President Kenyatta was rather thrilled about a picture of his father, Jomo Kenyatta and Ghana’s first President Dr. Kwame Nkrumah in the error-ridden brochure.

The error-prone brochure, authored by the Information Services Department (ISD), referred to Uhuru as the President of Ghana, while describing the 59-year-old country as a “low income country” among other misrepresentations.

The acting director of the ISD Francis Kwarteng Arthur who claimed responsibility for the embarrassing slips has been relieved from his post by the Chief of Staff.

Many Ghanaians have said the development lowers the estimation of Ghana in the comity of nations. Some Kenyan newspapers have ridiculed the blips.

But speaking on the matter in an interview with TV3, the President said even though the mistakes were unfortunate, it did not distract Mr. Kenyatta on the anniversary day.

“We actually went through the brochure, he (Uhuru Kenyatta) didn’t show that he noticed those mistakes, those mistakes are unfortunate and they are avoidable, it shouldn’t have happened”. 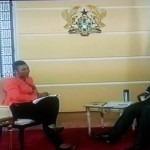 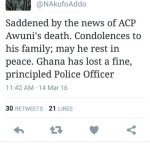