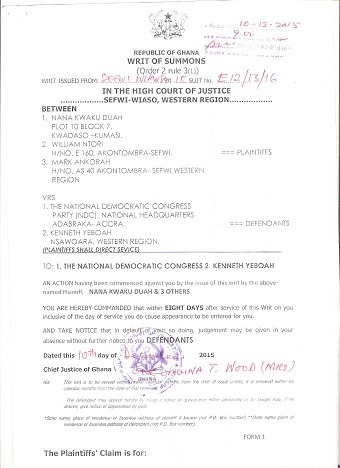 Two aggrieved members of the National Democratic Congress have sued the party and its parliamentary candidate elect for Sefwi-Akontombra constituency in the Western region, Kenneth Yeboah

The suit filed at a High Court in Sefwi-Wiaso in the Western region is praying the court to nullify the November 21 election that elected Kenneth Yeboah as the NDC parliamentary candidate for the Sefwi-Akotombra constituency.

The plaintiffs, Kwaku Duah and Mark Ntori say Kenneth Yeboah is not qualified to be elected Parliamentary Candidate of the party because he is not an active member of the party in the Sefwi-Akontombra constituency as the NDC constitution and guidelines for the parliamentary primaries stipulated.

The two NDC members want the court to declare the election of Kenneth Yeboah “null and void” and order the NDC to conduct fresh elections in the Sefwi-Akontonbra constituency.

Their present action, they contend, was as a result of failed attempts to get the party to rule on a petition filed ahead of the primary to challenge the parliamentary candidate elect’s candidature.

Reliefs being sought by the aggrieved NDC members are: