Donald Trump sought to regain his edge in the early voting state of Iowa Tuesday, returning to the themes of economic populism that helped fuel his surge toward becoming the front-runner for the Republican presidential nomination.

Most polls now show Trump trailing in the state, which holds its caucus Feb. 1, to Senator Ted Cruz of Texas. But he continues to hold the advantage in national polls

Speaking to a large crowd in Council Bluffs, Trump vowed to return manufacturing jobs to the state.

“I really know the game,” he said while decrying the offshoring of jobs by U.S. corporations. He restated his vow to impose a 35 percent tax on goods brought into the United States by companies that utilize foreign labor in nations such as Mexico.

But Trump trained his wrath more on the presumptive Democratic nominee Hillary Clinton rather than Cruz or any of his Republican rivals.

Of the prospect of facing the first viable woman candidate for the presidency in the general election, Trump remarked, “If it has to be a woman, it shouldn’t be Hillary.”

Tuesday’s event in Iowa marked a clear shift in the race in which Trump has vowed to start using his personal fortune to bolster his candidacy in states such as Iowa, New Hampshire, and South Carolina, without entirely relying on the media attention he has garnered. He has announced an aggressive travel schedule in those states.

Moreover, Trump said earlier Tuesday he plans to run advertisements in early-voting states ahead of the first nominating contests in 2016.

“I’ll be spending a minimum of $2 million a week and perhaps substantially more,” Trump, the party’s front-runner, told reporters, according to video that aired on CNN. “I’m going to be doing big ads in Iowa, New Hampshire, South Carolina, and they’re going to be very substantial.” 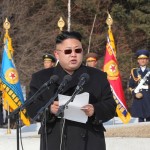