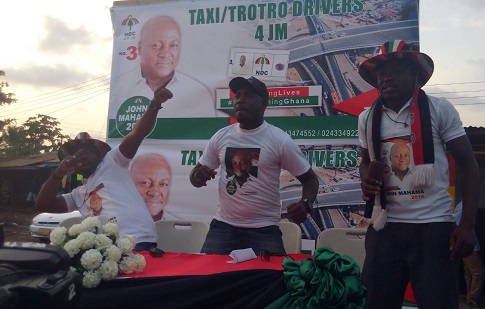 Some Taxi and Trotro drivers Associations in Accra have thrown their support for President Mahama and all Parliamentary Candidates of the National Democratic Congress (NDC).

The drivers Thursday stormed Pig Farm in the Ayawaso Central constituency in the Greater Accra Region to campaign and galvanize votes for President Mahama to be retained come December 7.

Spokesperson for the drivers, Frank Djaba, explained that Taxi and Trotro drivers are going to vote for President Mahama because of his good works.

“President Mahama has done a lot of work and Ghanaians will look at his good works in Education, Health, and Roads and make their choice,” he said.

A known sympathizer of New Patriotic Party, Gifty Appiah, who defected to the NDC, added she will not vote for the NPP because they cannot win the December 7 polls.

“I have been voting for NPP but this year I think President Mahama has done well and I don’t want to vote again for the NPP to lose again. I’m voting for NDC,” she declared.

The Associations have expressed their willingness to campaign for President Mahama and the NDC to retain power. 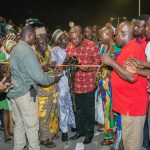