Unlike the victory of the Agbogbomefia of the Asogli state, Togbe Afede XIV, the twice defeated flagbearer of the New Patriotic Party Nana Akufo-Addo rarely delays after 24 hours before sending his best wishes and congratulations to victors in a contest and even unrelated political instances such as birthdays of musical artist. Yesterday, the chief of Akufo-Addo’s Kyebi hometown, Amotia Ofori Panin lost out miserably in the contest for the Presidency of the National House of Chiefs, one which has been defined by experts in that section as an “easy contest.”

But in what has been described as a “bizzare circumstances” by many keen political players, Nana Akufo-Addo, mischievously, underwent a deafening silence over the election of an Ewe native and Chief, Togbe Afede to the Presidency of the National House of Chiefs. Sections of the public has been surfing the various social media accounts (Twitter, facebook ) of Nana Akufo-Addo in a longing desire to see an “updated status” of Akufo-Addo congratulating the Ewe man, Togbe Afede but their desire was confronted with abject disappointment.

Many followers of Akufo-Addo on social media pages were left in awe over this “amateurish” act from the NPP Flagbearer. A follower of Akufo-Addo on Twitter with the name Abena Ofori-Atta, poured out her disappointment in Akufo-Addo “Why exhaust this golden opportunity to let Ghanaians know that you will be a President for all. When you begin to express discrimination in congratulating victors in a contest, vital in enriching our democracy such as the House of Chiefs only because your Kyebi chief was rejected, then it exposes your lack of patriotism and sense of unity.” Another friend of Akufo-Addo on Facebook Thomas Worlanyo puts his this way “Akufo-Addo, you are a sour grape. Your Kyebi Chief didn’t even come second in the contest. This your strange posture and deliberate failure to congratulate the Ewe man only reveals your intense hatred for Ewes.”

Another Political analyst based in the United Kingdom expressed ” Thank God the tribal bigot Osafo Marfo revealed the evil plot of the Kyebi Mafia. Akufo-Addo won’t congratulate Togbe Afede because, like Osafo Marfo said, Volta Northern Greater Accra and Central regions have no resources and don’t give income to our Nations, hence do not deserve to have their men controling affairs of Ghana.”

The Agbogbomefia of the Asogli state, Togbe Afede XIV, has been elected as the new President of the National House of Chiefs polling 25 votes out of the 49 votes cast. He beat three others; Awulae Attibrukusu of Lower Axim in the Western Region, Osagyefo Amotia Ofori Panin, and the Kyebi hene from the Eastern Region and Nana Kobina Nketia V of Essikado traditional area to clinch the seat. Awulae Attibrukusu polled 11 votes, Osagyefo Amotia Ofori Panin polled 10 votes and Nana Kobina Nketia V polled 3 votes. 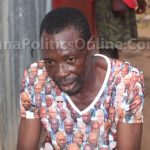