But according to the Vice President of the GPRTU, Robert Sarbah, there has been no increment in fares yet.

Speaking in an interview with TV3, he said the public and other stakeholders should expect the new fares “within this week”.

“I believe within this week, we should be able to do that,” Mr. Sarbah said.

On Monday, a joint statement from the True Drivers Union and Concerned Drivers Association announced an increase in transport fares, to the dismay of many.

The statement announced a 10 per cent increment in fares effective Monday, May 28.

However, the GPRTU says the groups are not part of stakeholders at the negotiation table, adding their statement should be disregarded.

According to Mr. Sarbah, negotiations are done by GPRTU, Progressive Transport Owners Association (PROTOA) and the Ghana Road Transport Coordinating Council (GRTCC) as well as the Ministry of Transport.

He further confirmed that the new transport fares will take effect on June 1. 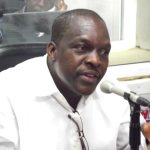