The New Patriotic Party’s (NPP) representatives on the Transition team, have said 80 percent of their work has been completed ahead of Saturday’s inauguration ceremony.

President John Mahama will hand over power to President-elect Nana Akufo-Addo of the New Patriotic Party (NPP) on January 7, 2017, and the Transition team is set to hold a press conference later today [Tuesday], where it will provide details on the protocol for the inauguration.

Speaking to Citi News, the spokesperson for the incoming government on the Transition team, Kojo Oppong – Nkrumah, assured that all questions pertaining to the transition will be addressed during the press conference.

“We are done with about 80 percent of everything we need to do. We will brief the entire nation and we will be able to provide final details to every question that everybody may have and also provide channels through which, on a regular basis people can get information.”

Mr. Oppong Nkrumah also indicated that the inaugural committee of the Transition team was putting final touches to preparations for the day of the inauguration.

“We are going to brief the entire country through the media step by step on dignitaries who are coming, the itinerary for the day, how to get to the venue, what to look out for and how to satisfy the public interest in what is going to happen,” he added.

The Transition team has been in place for the past four weeks, and it has consisted of sub-committees that have been ironing out the planning of the inauguration ceremony, handing over the machinery of the Civil Service among other mandates.

By the provisions of the Presidential Transition Act 2012 (Act 845), the transition team is to make comprehensive arrangements to regulate the transfer of political power. 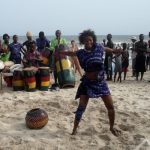