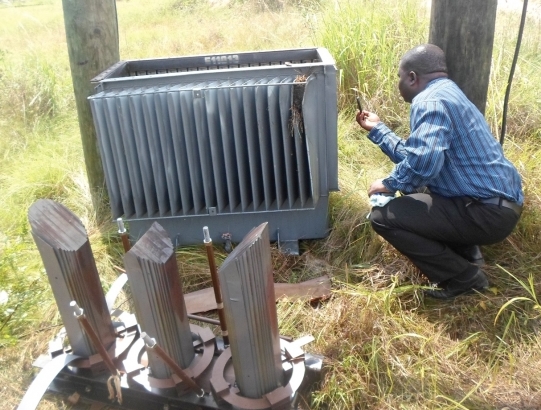 The management of the Electricity Company of Ghana (ECG) has expressed deep concern about the rampant theft of oil and windings in the company’s transformer at Kojo Oku near Nyanyano in the Central Region.

The transformers, mounted on electricity poles, are used for the distribution of high voltage electricity to customers within and around the communities.

The practice is said to be adversely affecting the operation of the equipment to provide reliable power supply to the community.

Disclosing this to the Daily Graphic in an interview at Kojo Oku last Thursday, the Kasoa District Engineer of the ECG, Mr David Ashitey, said the stolen oil and windings could cost the company about GH¢3,500 to replace.

“Customers who receive their supply through this transformer will have to remain in darkness until the transformers are replaced,” he said.

Mr Ashitey said the residents of the area informed ECG officials last Wednesday that they were experiencing an unexplained blackout.

The report, he said, prompted the company to carry out investigations into the issue.

“When our team arrived in the area, they realised that the , which was serving the entire town, had been pushed down and the oil that enabled the equipment to function well had been drained.”

“The manner in which the transformer was taken down and the oil poured from the tank shows that those who committed the crime could be professionals,” he said.

To address the challenge, Mr Ashitey appealed to the residents of the area to collaborate with the ECG to protect the transformer from criminals.

“As good citizens, you must be responsible by taking care of the transformer and warding off thieves from getting closer to the equipment,” Mr Ashitey said.

He also appealed to the residents of the area not to hesitate to alert the police when they see any suspicious persons in the area.

Some of the residents who spoke to the Daily Graphic blamed the rampant thefts in the area on the frequent power outages they experienced.

Mr John Setordzi, a landlord, said the dysfunctional electrical poles in the area had empowered criminal elements to operate with ease.

“I would want the management of the Kasoa branch of the ECG to come to our aid and repair useless electrical poles to enhance security in the area,” he said.

The Nyanyano District Commander, Superintendent J B. Pokoo- Akins, said the police were conducting investigations into the issue.