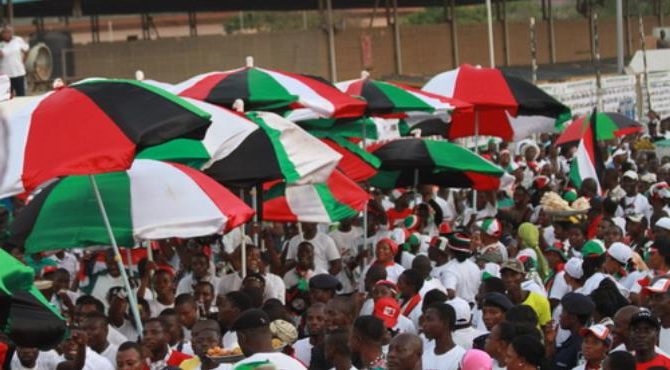 With the demise of late President John Evans Atta Mills, the political environment changed dramatically, with the Presidential tickets of the two leading parties suddenly turning from the south/north team for the ruling National Democratic Congress (NDC) to a north/south dimension.

Under its Election 2012 manifesto: “Advancing the Better Ghana Agenda,” the NDC claims that since 2009 Ghana had made significant progress, attaining and sustaining middle-income status for the first time in the nation’s history.

In an executive summary the NDC claims that it is presenting to the good people of Ghana, the 2012 manifesto that seeks to renew the covenant the party has with the people of Ghana in pursuance of our common and cherished goal of ‘Advancing The Better Ghana Agenda’ for all.

“This Manifesto is based on the achievements over the last four years during which period we established a firm foundation for delivering a program of economic recovery and sustained welfare for the people of Ghana.

“The 2012 NDC Manifesto therefore underscores our commitment to build a prosperous and equitable society”, it declares.

The NDC said under their management they have succeeded in maintaining a substantial growth rate and reducing inflation to single digit consistently.

“Our public and private sector policies and programmes have been robust and successful in building the foundation for the sustained prosperity that we promised our people.

“This solid foundation has to be advanced in a manner that our growth trajectory is accelerated, our social and welfare initiatives for ordinary citizens is expanded, the opportunities to provide access and quality education to ALL our children is achieved, and our nation is able to feed itself and reap the benefits in expanded trade of our diversified agricultural produce,” President Mahama stated.

The NDC is therefore using its achievement record over the past four years as basis for re-election, using a manifesto which they described as a bold, forward-looking agenda, which enumerates the party’s solemn commitment to advance the Better Ghana Agenda, under President John Dramani Mahama.

It pledges to ensure that ENERGY FOR ALL becomes the bedrock of socio-economic transformation by expanding production and intensifying regular and reliable access to electricity and energy including those who currently do not have access.

Promoting a thorough decentralized governance agenda in a manner that empowers regions and districts to acquire the needed resources and capacities to make decisions and be accountable to citizens, as well as providing the needed leadership to ensure that citizens’ voices matter in decision-making; that their demand for accountability is fulfilled and their aspirations for a Better Ghana “are reflected in the programmes and projects emanating from this Manifesto”.

According to the NDC, the Peace and Stability bestowed on the nation by its recently departed father, Professor John Evans Atta Mills guided its preparation of the Election 2012 Manifesto.

The party therefore urges the electorate to peruse the manifesto and see why it is important to give President Mahama the mandate to continue to advance the Better Ghana Agenda.

It states that the country’s economic performance will be deepened and diversified to provide a basis for the provision of the basic human needs of the people under the next NDC administration.

“Our governance will be more thoroughly decentralized to enable citizens to access resources and demand accountability for services; Our infrastructure development will be intensified to accelerate the transformation of Ghana into a full middle-income status”.

The manifesto also expalins that agriculture will be modernized to involve a strong partnership between private agricultural investors and peasant small-holders in a manner that introduces capital, technology and an expanded local and global market access.

According to the NDC all of these will enable the economy to expand, creating the needed jobs that will propel prosperity for all and Advance the Better Ghana Agenda.

The NDC says the 2013 administration journey will begin with a renewal and consolidation of the Social Compact we long established with the people of Ghana through years of sustained policies for the realization of social equity and developmental justice.

At one of his public engagements President Mahama noted that events of the last few months had demonstrated more vividly and vindicated the assertion by the founder in 2008 that “Ghana is larger than all of us, and the NDC’s victory is the victory of ordinary and truthful Ghanaians guided by the proven history and performance of a Social Democratic Party and Government.”

The President said in four years since the NDC began the “Better Ghana” agenda, it had kept faith with the people, supporting them to work hard to produce the nation’s wealth, to uphold truth, abhor corruption, and distributing the benefits of hard work equitably for the greater, social and economic well-being of all Ghanaians.

“As the new leader of our great party and the NDC’s Presidential Candidate for the 2012 elections, it is my pledge to provide the needed leadership to ensure that citizens’ voices matter in decision-making”, President Mahama stated.

The party’s campaign promise on education seeks, among other things, to eliminate the remaining 60 per cent of identified ‘Schools-Under-Trees’ and provide decent facilities for all rural schools; ensure 100 per cent access for all children of school-going age in compliance with the constitutional requirement of FCUBE.

On health, it indicates that the next NDC Government will double the number of Community-based Health Planning and Services (CHPS) compounds from about 1,600 to 3,200 to meet the needs of under-served communities.

On Youth and Sports, the NDC promises to establish a GH¢10 million Jobs and Enterprise Development Fund to encourage and support young people to become successful entrepreneurs and create sustainable job opportunities.

On the economy the manifesto says the next NDC government will pursued in the next four years: an average GDP growth rate of at least 8 per cent per annum and a single digit rate of inflation;

It further states the party’s intention to establish Commissions of Enquiry to investigate matters related to public land acquisitions and empower the office of the Sole Commissioner responsible for the management of judgement debts to ensure the best interest of Ghana is served at all times.

“As social democrats, the NDC believes that it is the duty of the Government to pull the marginalized, disadvantaged and the poor into the mainstream of the socio-economic order.

“We believe that universal access to health care, education, affordable food, water, electricity and housing is the right of every Ghanaian” says the manifesto, adding that the NDC Government will establish and implement a framework for collective and individual contribution to the peace, safety, security and stability of the country when retained in power.

The party declares that its 2012 Manifesto contains the policy initiatives that are required for building the new era of social justice and equity, a goal that has been pursued for the past two decades and which the NDC shares with many millions of Ghanaians.

The million dollar question is: “Will these campaign promises win the hearts and minds of the Ghanaian electorate so as to bring the NDC the much-needed votes?” This, obviously, is a question whose answer can be obtained only on December 7, 2012.