It is often said, “A prophet is never recognized in his own land.” The people of Tamale have done the opposite of this, showing their appreciation to their son from the savannah part of the country.

H.E John Dramani Mahama will go down in history as the first Northerner to have served a full term and on the verge of going second term, due to his historical development across the nation. The Northerners during the JM Appreciation walk, confirm that they have had its fair share of the national cake.

This is a president whose commitment to the Muslim fraternity, ensured that the hustle and painful experiences, that Muslims go through, to perform Hajj becomes a thing of the past.

In an emotional and historic moment, Muslim pilgrims were airlifted from Tamale to Mecca. This single visionary act has changed the fortunes of subsequent pilgrimage which was evidential in the 2016 hajj.

Indeed this was equally possible because the foresighted President, John Dramani Mahama, determined to have the Tamale airport upgraded to international status.
Tamale is now open to the international air travel business which comes with enormous economic and business benefits.

Gone are the days when the 3 northern sectors were stereotyped as only farmlands.

The new Buipe Cemetery factory that is on stream, will create multiple streams of jobs, it will give people in and around Tamale authorship of their own cement for their construction purposes. It adds to the competitive market of cement production and cut cost of construction where all cement were transported from the southern sector which attracted extra cost.

To keep the educational prowess of the northern sector, his investment in education saw the Tamale Polytechnic engineering department receive a facelift in equipment and other auxiliary inputs. Soon this institution will be recognized as a Technical University.

Health sector achievement of His Excellency John Dramani Mahama is just wordless, and again the people of Tamale and its enclave were not left out. Currently the Tamale teaching hospital got 400 capacity expansion to make sure the health care of the people are given a topmost priority.

The Fufulso Sawla asphalted road have brought a great relieve to the people of Tamale and beyond. The number of hours one needed to spend just to travel along this area has been reduced drastically. This is indeed the true meaning of changing lives and transforming Ghana.

These coupled with many other interventions like the sharp upgrade and expansion that LEAP, NHIS e.t.c have benefitted the people of Tamale.

It is only that Natural that the crowds seen in Tamale this Saturday have come out saying “Thank-you and JMToaso.” 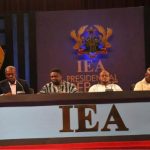