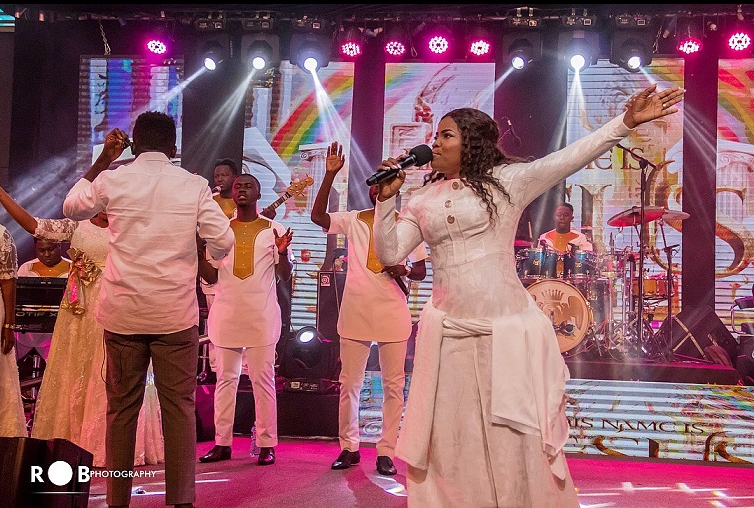 Thousands of people thronged the premises of ICGC to have an encounter with God in worship at the 5th edition Ohemaa Mercy’s Tehilla Experience which happened last Sunday, August 12, 2018.

The night which will leave an indelible memory on the minds of patrons began with praises, geography and also saw some wonderful performances from Ohemaa Mercy, Cece Twum, Moses O.K, Cwesi Oteng, Francis Amo, Elder Mireku, Juanita Bynum, and others.

Paving way for the Maestro Elder Mireku was Cece Twum who charged the atmosphere with breath-taking worship songs.
Each of the artistes billed for the night was given ten minutes to minister to the people, as some were given extra to fill the place with the holy spirit. The seemingly exited patrons couldn’t stop singing along when each singer was called on stage to perform.

Ohema Mercy who was the headline act of the show put a spectacular performance. Dressed in a classy long white dress, the ‘Aseda’ hitmaker started her performance with a low note song. She accompanied her performance with powerful dance moves and carried her fans along throughout her performance.
American singer Juanita Bynum also shined on the night as some fans were anxious to see her outside the auditorium, even though she came later. The crowd was screaming on top of their voices when she started her performance. Dr. Juanita Bynum in a press conference held on Saturday, August 11 ahead of the Tehilla Experience promised to build a head office of her ministry in Ghana and it will be her home of international ministry.
The ‘Tehillah Experience 2018’ was absolutely free for all and Patrons who attended the show heart desires were fulfilled.