The flagbearer of the main opposition New Patriotic Party Nana Akufo-Addo has challenged Ghanaians to kick him out if they vote for him and he does not deliver as President.

According to him, he is clear in his mind the direction and purpose of his leadership should he emerge victorious in the November polls.

“This year, try me too. Give me the chance to show you what I can do. Four years is not so far away. If I come and I don’t succeed, kick me out. God knows my heart and I can assure you that I won’t disappoint you. Progress and prosperity are what I am offering the people of Ghana,” the former attorney stated when addressed a gathering of Muslim clerics and Chiefs of Settler communities in Derma in the Tano South constituency in the Brong Ahafo region on Sunday.

Akufo-Addo also dismissed the perception that the Danqua-Dombo-Busia tradition is more tilted towards Akans.

“This talk of the NPP being anti-Northerners is simply not true. When you go into the history books, all the leaders of the tradition from which the NPP emerged from are Northerners. The tradition we belong to is called the Danquah-Dombo-Busia tradition. Dombo hailed from the North. Jato Kaleo, Abaayifa Karbo, Yakubu Tali, B.K Adama, Imoro Salifu, C.K. Tedam, were all Northerners who started our party,” he said.

He continued, “In my attempts at the Presidency, I have stuck with my running mate, Alhaji Dr. Mahamudu Bawumia, who comes from Walewale and is also a Muslim. President Kufuor, before he won the 2000 election, and during the entire tenure of office chose a running mate from North, in the person of the late Alhaji Aliu Mahama, who hailed from Yendi. So if somebody says the NPP hates Northerners and Moslems, it can never be true. The records do not show that.”

The former foreign affairs minister who is contesting the presidency for the third time will face-off with his old rival President John Mahama of the NDC in the November presidential and parliamentary polls. 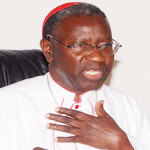