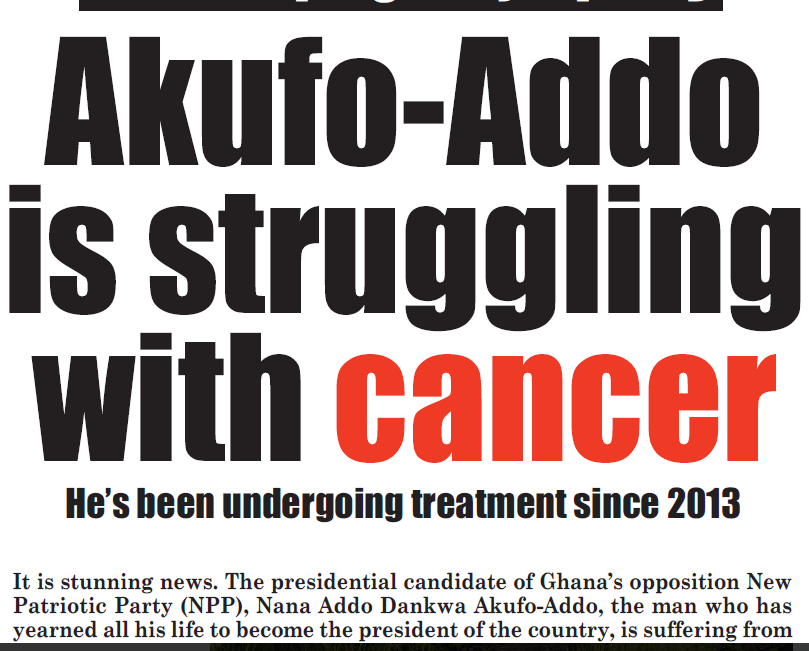 We at Africawatch pride ourselves on being one of the most uncompromising, unbiased and truthful pan-African magazines, and it was in that spirit that we covered in our August issue the health
status of Nana Addo Dankwa Akufo-Addo,the presidential candidate of Ghana’s main opposition New Patriotic Party (NPP). We felt it was a story of vital national and international interest, with ramifications for Ghanaians in the upcoming election as regarding Akufo-Addo’s personal health
and ability to withstand the rigors of the presidency.

In that cover story, we stated that we had clear medical proof that the NPP presidential candidate did not have only prostate cancer but also other serious complications.

We said he had been diagnosed with prostate cancer as far back as June 2013 at the Wellington Hospital in London and that he had since been undergoing treatment at that
hospital.

From Akufo-Addo’s medical records that we obtained, it is obvious that he has an acute kidney injury as well as an enlarged heart, all of which are life-threatening diseases, and for which he has been receiving medical attention at the Wellington Hospital and, indeed, has undergone
catheterization at that medical facility.

We wholly sympathize with Akufo-Addo
as he battles against these serious diseases.
Our thoughts and prayers are also with
his brother, Edward ‘Bumpty’ Akufo-Addo,
who is also seriously ill at this time. Edward
has been at the side of the presidential
candidate since the 2008 elections as a
leading member of his personal finance
team. We understand Executive Editor Steve Mallory that with two key
Africawatch l September 2016 7
Nana Akufo-Addo is at a
crossroads, as he faces the
very real challenges of serious
ill-health both to himself and his
brother, while his political party,
the NPP, faces financial
problems and internal strife.
members of the Akufo-Addo family being
critically ill at the same time, this is a very
difficult situation for the family to bear, and
we ask the Almighty God to bring them to a
speedy recovery.
As we stated in the Akufo-Addo cancer
story, illness is, of course, a very private
affair, and sharing such information is
usually an individual decision for any
private citizen, just like Edward. But when
one is making a run for the presidency,
such as Akufo-Addo is doing, then the entire
public has a right to know the state of that
candidate’s health, because of the massive
responsibilities that come with the position.
Akufo-Addo is no longer simply a private
citizen, so his health status is no longer just
a private matter, and the people he seeks
to govern have the right to know about
his illness, and such medical transparency
far outweighs Akufo-Addo’s right to such
privacy.

In as much as we sympathize with Akufo-
Addo, we were duty-bound to report his
diagnosis of prostate cancer and his medical
complications. 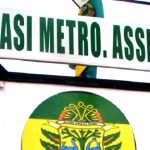