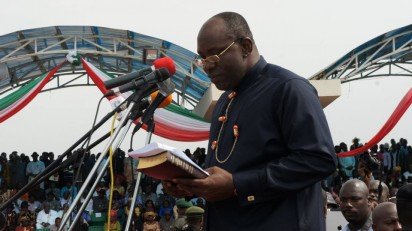 Dickson, fondly called ‘Countryman Governor’ had maintained a commanding lead in the state governorship election since December 5, 2015 when he clinched six out of the seven councils in the results declared by the Independent National Electoral Commission INEC. His victory dance was, however, put in abeyance pending the conclusion of the election in units and constituencies that election results were not produced on December 5.

Yesterday evening as the results from the contentiously contested Ijaw South Local Government Area were declared, the celebration that was initially in muted form in the Dickson camp went full blast. The immediate past governor of the state and candidate of the All Progressives Congress APC, Chief Timipre Sylva, had given the impression that he would reverse Dickson’s 30,000 plus lead with the results from Southern Ijaw. However, when the result was declared, it became an anti-climax for Sylva as Dickson won in the stronghold of his now late patron, Chief Dipereye Alamieyeseigha. Dickson won in Southern Ijaw with 23,081 votes to the 10,216 polled by Sylva. It was indeed a tortuous road to victory for Dickson. The triumph did not come cheap in an election that turned out to be the most fiercely contested in the political history of the oil rich state.

Many observers had predicted a photo finish race between the incumbent and his main rival, Sylva, due to the hype generated by the defection of PDP bigwigs to the APC and the argument that the state had never played opposition politics since the enthronement of civil rule in 1999. Their contention was that the state would rather flow with the centre than be in the opposition.

What particularly ignited the contest is the no love lost relationship between the two contenders, who have a history of political rivary between them. Four years ago, Dickson, a political godson of former President Goodluck Jonathan was used to replace Sylva as PDP governorship candidate in controversial circumstances.

With the defeat of Jonathan and PDP at the centre, Sylva buoyed with the changing political fortunes, staged a comeback and easily picked the APC governorship ticket having nominated almost all the statutory delegates at the primary convention.

On the road to victory, Dickson paid attention to every detail and left nothing to chances. His early preparation and campaign strategies coupled with his modest achievements in office worked well in his favour.

Many believed that his community based campaign approach was the difference between the two contenders. The incumbent during his campaign dubbed community to community campaign meet the people tour, visited virtually all the communities in the state to solicit the support of the people and also seized the opportunity to tell what his administration is doing to bring the dividends of democracy to their doorsteps.

The strategy no doubt helped his course as it swayed several undecided voters to key into his vision. Dickson could also be said to be lucky for having some old politicians around him who though may not have the resources to throw around but command the respect of their people. 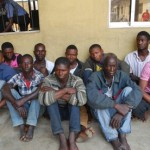