The University Teachers Association of Ghana (UTAG) has hinted of a nationwide strike from Monday, September 18, 2017 in solidarity with their colleagues at the University of Education, Winneba (UEW).

The strike is to ensure that the matter which resulted in a strike action by lecturers on that campus is addressed.

The Presiding Judge, Ato Mills-Graves, granted the plea of the plaintiffs and ordered the two officers to step aside.
The UEW branch of the University Teachers Association of Ghana (UTAG) has since indicated that it cannot offer services per the court order.
The lecturers say they are now in a state of confusion following the ruling.
The local president of UTAG at the UEW, Dr Samuel Bekoe is hoping that a nationwide strike by UTAG in support of the lecturers will find an amicable solution to the issues.
“We are on contract to teach within a certain environment and if the environment in which we are to perform our function as employees of the university is not conducive then it will not be effective for us to do our work and so that is exactly the situation we find ourselves. Currently we are not in a good environment to do our work effectively. So for the students who will suffer, if they have any concerns they should address it to the university because the university gave them admission and promised to give them tuition.
“We are staying out of the lecture room until two of the [suspended] officers are brought back and also, hands stay off completely from our private fund and investment.
“Yesterday, we [UTAG] had a national executive committee meeting and the decision we took there was that UEW UTAG should continue with the current strike and then on Monday, UEW will be joined by all other public universities in Ghana. So from Monday it’s going to be a total national strike,” he told Accra-based Class FM.

Background
The University was in June this year closed down temporarily following a court case brought against it by a former Assemblyman of Donkoryiem, Supi Kofi Kwayera over the continuous stay of the school’s Council.
The Council’s mandatory four year term expired in 2013. However, the previous National Democratic Congress (NDC) government ordered the Council to act until a substantive one is appointed.
The Education Minister at the time, Professor Naana Opoku Agyemang said that the protracted election petition in 2013 and some challenges facing the education sector were to be blamed for the extension.

But the businessman was not happy with the development. He subsequently filed a suit at a Winneba High Court demanding that all decisions taken by the Council to be declared null and void. 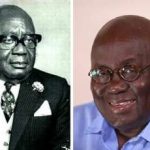