Mr. Mensah, said the accusation by the opposition New Patriotic Party (NPP), could not be factually accurate when the Scheme, has recorded hugest number of subscribers over the 8 years that the National Democratic Congress (NDC) has been in office.

He argued that, the NHIS, was one of the best models across the world, and so it cannot be said to be collapsing, when it total number of usage rose from 9 million in 2008, to 29 million by 2015.

The ex-CEO, expressed this contrary view, when members of the NDC Greater Accra Regional Campaign Taskforce, engaged the media on the need for Ghanaians to retain the president, John Dramani Mahama on Wednesday in Accra.

On the campaign trail, the opposition NPP, especially it flagbearer, Nana Akufo-Addo, and vice presidential candidate, Dr. Mahamudu Bawumia, and many other leading members, have claimed the NDC, had rundown the Scheme.

But while accusing the NDC, Members of Parliament (MP) of the NPP, keep registering their constituents on the Scheme for affordable and good healthcare.

The MP for the Ablekuma West Constituency, Ursula Owusu-Ekuful, in the Greater Accra Region, has been one of those MPs, who cries in the morning and sneaks in at night to have her constituents registered on the scheme.

It took the president who is on a campaign tour of the Eastern Region, to tell the NPP that, they should not register their members if indeed, they believe the Scheme, has collapsed.

Mr. Mensah, who is the Campaign Coordinator for the NDC Greater Accra taskforce said, “Ghana’s National Health Insurance Scheme, is one of the leading models globally and this is known to all of you, I guess. And it is also known that when it comes to strategies and structures insistence, Ghana’s Health Insurance has become a model that several countries, developing and developed have been coming to gain lessons in order to improve their internal arrangements”.

According to him, the statistics have always supported his claim and so the view that it is collapsed or it is collapsing, is a false one.

“Indeed within Ghana, we have seen growth in membership and the statistics are there for everyone to see. It is an open book. As at 2008, active membership was just around 9mllion, as at the close of last year 2015, active membership increased far beyond 29million. If you look at that gap, that gap tells you there’s growing public confidence in the Scheme.

The NHIS will from next year, work more efficiently, when it completes the restructuring process ongoing presently.

“The Scheme as at now is going restructuring, take stock, have a reflection, understand what has gone wrong and what has worked well. I guess as we enter the 2017, we will see a renewed health insurance scheme even stronger than what we are talking about today and what the world is claiming as the leading model.

On their call to retain the president, Mr. Mensah, said the president has done so much in the region and the country to warrant a second term.

Touching on almost all the sectors, he said the president has achieved unprecedented feat across board, listing some of them as those on health, housing, water, road, energy, power, information and technology, fishing, job creation, etc.

He mentioned some of the notable projects in the health sector, especially in the region as the 617 bed University of Ghana (UG) Teaching Hospital, the 420 bed Greater Accra Regional Hospital (Ridge Hospital), the 120 bed Dangme West District Hospital at Dodowa, the 100 bed Dome-Kwabenya-Madina
Hospital, the 104 bed Police Hospital Expansion project, GHAPOHA Maritime Hospital, Polyclinics, CHPS compounds and many others.

He said; while these facilities would go a long way to provide decent and permanent employment for health professionals, Ghanaians could now heave a sigh of relieve knowing that, in the event that they need these facilities because of ill-health, they can use them anytime.

On housing, the taskforce which is targeting 1.5million votes and 25 parliamentary seats, mentioned “unprecedented” housing projects such as the 5, 000 Unit Affordable Housing project at Ningo, the 5, 000 Nyamedua Estates project, the 168 and 368 units project for the Security Service, the Adenta Regeneration Project (SHC), the New La Villas Housing Project and Police Housing Project, the TDC projects.

Mr. Mensah, continued by enumerating the president’s performance in the water sector saying the “The supply of water to both urban and rural
communities in our country is unprecedented under President John Mahama”. According to Mr. Mensah, the president is committed to ensure that 85% of Ghanaians have good drinking water.

“We have benefitted from the Kpong Water Supply expansion project phase 1 which is currently supplying over 40 million gallons of water a day to hundreds of thousands of inhabitants in the Greater Accra Region”. Towns that are benefitting from this project are, Adenta, Madina, Ashongman, North, East and West Legon, Ashaley Botwe, Haasto, Asofaa and Abokobi, Dome Pantang, Adjirigano etc.

Others were the first every desalination water treatment plant located at Teshie-Nugua, supplying 13.2 million gallons of potable water per day to some 500, 000 inhabitants of these areas and many other projects in the region and parts of the country.

Touching on corruption, a member of the taskforce, Dr. Michael Kpessah-Whyte said the government of the president Mahama has done well in the fight against the menace.

The Executive Director of the National Service Secretariat (NSS) said, the president has never failed to sanction investigations into reports of corruption by the media against people and institutions and sometimes, initiated his own investigations.

He cited a case at the Secretariat, where the president personally tasked a state institution, the Bureau of National Investigations (BNI) to investigate officials, who were alleged to have dabbled in criminal activities for years. While some were out rightly dismissed, others are still facing the law. Many were also made to pay back the money they stole. 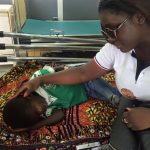