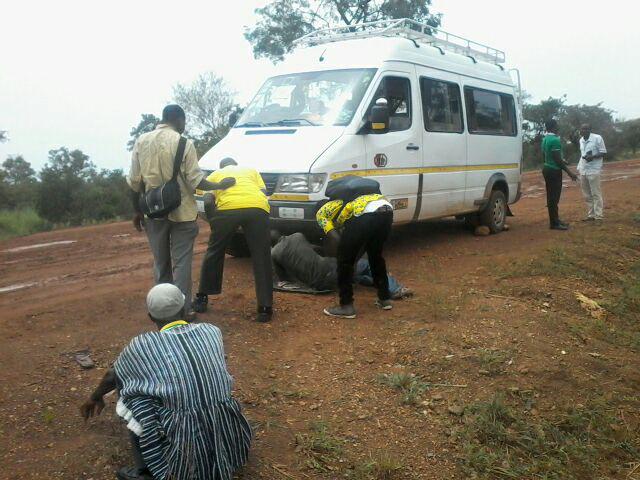 after reports that some journalists in the Upper East Region who were travelling from Bolgatanga to Bawku, Thursday morning to cover President Nana Addo Dankwa Akufo-Addo’s tour of the region were left stranded as their vehicle broke down in the middle of the road, Joy News’ correspondent, Albert Sore, has given his account of the situation.

Earlier, Information Minister, Mustapha Hamid in a statement debunked reports that he left the journalists stranded after the car broke down.
While stating that “the vehicle that broke down was NOT the vehicle that was hired for journalists in the region by the Director of Communications at the Presidency” and that, “they were given a Hyundai H1 bus”, the Minister mentioned that when he got to the scene, he “picked three journalists and proceeded while instructing the PRO of the RCC (Godwin Nkunu) to stay and find a vehicle for them to catch up with the Presidential team” as he “had room in his vehicle for three people”.

He further stated that, “The group of journalists who are said to have been stranded were not part of the official presidential press team. Apparently, the Public Relations Officer of the Regional Coordinating Council, Godwin Nkunu, hired this bus for some other journalists chosen by him and unknown to the Presidential Communication team.”

In a Facebook post, Albert Sore corroborated Mustapha Hamid’s response but said there was a communication lapse.

THE UPPER EAST MEDIA BUS CONTROVERSY. HERE’S MY ACCOUNT OF WHAT HAPPENED

It was the Regional Communications Director of the NPP, Edmund Awuni who first called to inform me of the president’s coming and to invite me for coverage. This was about a week ago.

However the day before the president’s arrival, it was the RCC’s PRO who called to inform me that he had left my accreditation tag at A1 Radio so I should I go and pick it up. Edmund never called me again so naturally, I assumed that the responsibility of media had been left to the PRO.

On the first day of the President’s visit, I did not join any press vehicle because I went somewhere and came straight from there to the venue on my motor bike. So I did not get to see which vehicle they used on that day.
This morning, I called PRO to find out about transport arrangements for press, since he was the one who called me about the accreditation. He told me that the press’ vehicle was at the RCC so I should be there by 9am.

When I got to the RCC, it was this 207 bus that later broke down that had been brought for us. It looked okay in appearance but I was worried about its capability of keeping up with a presidential convoy. Upon getting closer to some of my colleagues who had already been waiting by the bus together with the PRO, I realised they were discussing about the vehicle and GTV’s cameraman was seriously insisting that the vehicle was not good enough.
Still, the PRO insisted that he had made every effort to get a good car and that was the best he could get.

Before we could resolve the issue of the vehicle, the president was already on his way to the Vea dam. At this point it was either we jump into the vehicle and follow the convoy or forget the trip.

We decided to follow. By the time we caught up with president at Vea, everything had almost been done. In fact, today most of us run a marathon at Vea, just trying to keep up because our vehicle had to park way behind the convoy so that we catch up on foot.

We managed to get what we could at Vea but the journey to Bawku was on another level of convoy speed. At this point, I started to make a lot jokes and took selfies as we laughed at how the V8s were leaving us behind and the security officials were stopping our car because they thought it was some market lorry.

The GNA’s reporter made a firm decision that he was no longer going on the trip and when we got to Bolga town, he stopped the car and alighted. The rest of us made the decision to keep moving.

At this time, I was still completely oblivious of the fact there was another press vehicle. Then I realised that some usual colleagues were absent and asked how that was so. It was then that someone mentioned that they had “joined other cars”. So for me, my thinking was that these missing colleagues got to join people that they know in the government in their cars.

Towards the Tilli forest from Nangodi, we started smelling something burning in our car and started asking the driver to check it out. He kept moving, obviously determined to keep up with the president’s convoy. As he sped on, the smell got intense so we insisted he stopped to check. When he got down and checked, it was something in the rim area that was rubbing against the front, left tyre. He then decided to change the tyre which had not even punctured (at least, not yet because if he had kept moving without checking it, the tyre could have burst along the way).

So stranded on the road, I took pictures and shared them on the regional press corps’ whatsapp page because I had earlier shared pictures of the bus on the same page. All this time, most of us were actually laughing about the experience.

Having given up hope of ever catching up with the convoy which had sped away like lightening, following our predicament, we decided to move on with the rest of our lives.

We had almost taken a unanimous decision to return to Bolga when we saw a government vehicle approaching and the PRO stopped it. It was then that we realised it was Information Minister, Mustapha Hamid in the car.

PRO spoke to him briefly and together, they approached our broken down bus as our determined driver lay sprawled in the dirt, doing everything possible to fix his problem.

Mr. Hamid took a squat to have a look at what was wrong with our bus (mind you, that photo of him circulating on social media was taken by me).
Perhaps seeing there was not much he could do about the bus, he decided to take some of us in his car. GTV’s cameraman was holding his camera at the time and I was standing close to him. What I think happened was that Mr. Hamid saw the GTV logo on the camera and that was how he invited the GTV crew to join him in his car. They were 3 in number and he said he had space in his car for them. I was also wearing my branded press jacket so he asked; “Joy News, are you with a crew or you’re alone?” To this, I responded that I was alone and he said he had space for me too and that I should join his car. However, when I got my things from our broken down bus and got to his car, it was already full.

At this time, an old white pickup vehicle had also stopped at the spot and the people in it invited me and two others to join. I run to sit in the pickup, thinking it was traveling with the minister. It was after we started moving that I realised that the two men in the pickup were headed to Garu on their own and had nothing to do with the president’s tour.

Resigned to fate and bottled up with intense infuriation, I decided to hold my cool and listen to music. Since the president would be visiting Garu, we would get there and wait for him, we concluded.

When we got to Garu, the owners of the pickup were not going towards the President’s durbar grounds. We saw another pickup truck and begged the driver to give us a lift to the durbar grounds. That’s how I got to Garu.
The rest of our colleagues who stayed with the bus later got a pickup from the Bawku West district assembly in Zebilla, through the facilitation of the PRO and joined us at Garu. To be honest, I don’t know if the information minister had a hand in the organization of this pick up or not. We all got busy with work and afterwards, came back home peacefully.

THE OTHER PRESS BUS

It was when we got to Garu that I found out that there was another car for the press. The Hyundai bus that has been mentioned. It is an air-conditioned mini-bus similar to the ones that usually convey passengers to and from the Tamale airport.

When the program was over, I was told about this bus so I went to check if they had space in it so I could join. There was one vacant seat left so I took it.

1. Are the journalists that were in this bus good journalists? My answer is ABSOLUTELY YES.

2. But is this what constitutes the official press corps that has now been mentioned as what was organized for the president’s coming?

4. How come that despite having them in the bus, there were two empty seats that were later filled by me and the Graphic reporter and yet GTV and Graphic (state media) were not in this official bus from the beginning of the trip? Forget me on the assumption that I was not considered as an official reporter, even though the RCC gave me an accreditation tag after Edmund Awuni personally called and invited me for the events.

5. GTV and Graphic were not in this official press bus. Does that mean they were not officially invited to cover the president’s trip?

So you see? I personally have no interest in giving the President’s trip a bad colouring whatsoever. I saw the bus the way it was and made the decision to join it anyway, just like the others who did. And I accept responsibility for my decision because professionally, my responsibility as a correspondent requires that I take such decisions sometimes. But ask; what would have happened if Graphic and GTV had not showed up to report the event?

Besides this issue of the vehicle, check the reports that some of us have given (visuals and all) about the president’s trip and you will know that for some of us as news men, missing out on this would have been tantamount to undermining the importance of the President in news making. But well… this is Ghana.

We make mistakes and we learn and I definitely have learned from this but for anyone to suggest that those of us who were in the bus that broke down joined the president’s trip through a back door is very insulting.

Obviously, there was a planning lapse somewhere and the questions I have asked here must be answered, if the people responsible want to get to the bottom of this matter. The real causers of the problem are there so fish them out and deal with them as you may deem fit. But let no one come at me or any other journalist in this region.

Make of this, what you will but this is my true account of what happened. GOOD NIGHT.