Deputy General Secretary of the governing National Democratic Congress (NDC) Koku Anydoho has warned the Volta Regional Chairman of the opposition New Patriotic Party (NPP) John Peter Amewu to desist from any act that will create mayhem on election day, as he’ll be dealt with ruthlessly by the security agencies.

The Volta region branch of the New Patriotic Party on Tuesday announced a strategy geared towards preventing alleged Togolese on the Ghanaians voter register from voting during the December polls.

The strategy dubbed, “Operation Eagle Eye”, according to the party is intended to keep surveillance along the border communities by deploying its men on election day to prevent supposed Togolese voters from entering the region to vote.

Mr. John Peter Amewu, Volta Regional chairman of NPP announced the strategy at a media briefing in Ho on Tuesday and said the party is poised to ensure credible presidential and parliamentary elections on December 7, devoid of foreign voters.

In August 2015, the NPP running mate, Dr Bawumia at a forum to drum home calls for the creation of a new voters’ register, said the party had, after an investigation found, matches of 76,000 Togolese names on Ghana’s electoral roll.

Dr. Bawumia said, the team set out to compare Ghana’s voters’ register with neighbouring countries and the results were startlingly alarming.

With copies of the Togolese voters’ register and that of Ghana, the team used biometric facial recognition technology which found potential matches.

But speaking on the sidelines of the Chief of Staffs campaign tour of the Volta Region, Koku Anydoho stated that the NPP Regional chairman will be met with brute force if he tries to prevent legitimate voters from casting their ballot in the crucial polls which promises to be keenly contested between the two leading parties in Ghana.

“Amewu is trying to create the impression that this NPP claim about Togolese voters is true, so there is ‘Operation Eagle Eye’. There’s nothing true about this Togolese thing, if there’s any Togolese voter in Ghana then it’s Peter Amewu himself, go and ask him where he hails from…his name Jean-Pierre Amewu, today he says he’s John Peter Amewu. His parents come from Togo and I’ve called him to a debate in Ho, his ancestry where does he come from, he should give us a break.”

He added: “All this Eagle Eye nonsense it because they want to create mayhem, let them understand that the police, military and the security agencies will deal drastically with Amewu and co, if they dare misbehave during elections. If they must be put behind bars they will be put behind bars. We’ll not accept any nonsense from any group of desperate politicians who want to create mayhem where there should be no mayhem. Amewu should know that this his Eagle eye…eagle eye thing, he should be careful that he doesn’t lose one eye.” 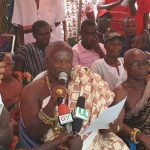