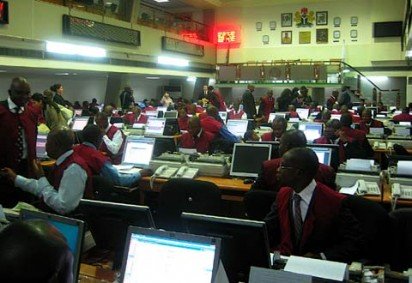 Investors in the Nigerian stock market yesterday suffered another setback as their investment dropped by over N233.2 billion. The Nigerian equity market opened the week on a bearish note as the benchmark, All Share Index (ASI) further shed 2.5 points to close at 26,350.18 points on the back of the heightening macroeconomic risk underlined by the continuous slide in crude oil prices and foreign exchange uncertainties which have kept sentiment negative.

Market capitalisation, another stock market gauge declined N233.2billion to close at N9.1trillion. The bearish trade was majorly driven by sell down pressure in blue-chip Industrial and Consumer tickers. Dangote Cement dropped by 4.3 per cent , WAPCO   declined by 9.7 per cent and Nigerian Breweries shed 3.0 per cent . Market activity also waned as aggregate volume and value of traded equities declined 45.8 per cent and 29.2 per cent to 127.7million units and N1.4billion respectively.

All sector indices closed in the red. It was led by the Industrial Goods index which dipped 6.4 per cent. Afrinvest Research stated that the sector was weighed-down by selloffs in Dangote Cement , which shed 4.3 per cent  and Lafarge 9.7 per cent.

The Consumer Goods and Insurance indices both trailed with a 1.5 per cent decline each. The Consumer Goods index dip was pressured by sustained depreciation in Nigerian Breweries, which declined by 3.0 per cent, while MANSARD dropped by  (-4.9 per cent . Banking tickers remained bearish resulting in a 0.6 per cent decline in the Banking Index while the Oil & Gas indices waned 0.6 per cent

According to Afrinvest, “The sustained bearish run in the bourse indicates the poor sentiments for equities. Nevertheless, the selloff cannot be disconnected from portfolio moves by fund managers exiting their position after reporting their full year numbers. We remain bearish on equities in the short term although we expect some level of bargain in the session.”