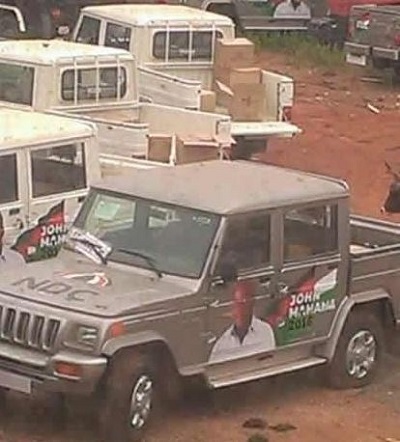 Investigations conducted into the controversial Mahindra 4×4 vehicles indicate that the State has no stake in the over 50 trucks that were being branded in the colours of the ruling National Democratic Congress (NDC) at a location along the Spintex road in Accra.

Kasapafmonline.com can authoritatively state that the trucks were procured by one of the bigwigs in the NDC which he intends to donate to the party for the electioneering campaign.

Pictures of the branded Mahindra trucks went viral on social and mainstream electronic media, Thursday, March 31, 2016, with the architects of the act alleging that the 50 vehicles were imported into the country to be distributed across the offices of the National Commission on Civic Education (NCCE) for voter education.

Following the publications, the Director of Marbles and Granites, Edmund Ayo Ani and a Chinese woman were picked up by the Police and later handed over to the Bureau of National Investigations (BNI) for being the brain behind the leaked photos.

National Security Advisor, Alhaji Baba Kamara, has admitted that he reported the matter to the authorities leading to the arrest of the duo.

This website can also confirm that the branded exercise was under the strict instructions of the National Security capo.

Meanwhile, Alhaji Kamara, has stated categorically that if anyone has any information on any wrong doing on his part or anybody for that matter, that person should not hesitate to report to the security agencies for immediate action to be taken against the culprit.

Information reaching this website indicate that the vehicles were part of the NDC’s pool of vehicles being prepared for the 2016 general elections. The said vehicles according to information gathered are not for any state institution as is being misconstrued.