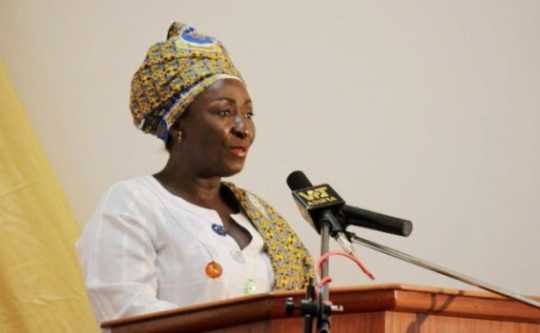 THE DEPUTY Minister for Tourism, Culture and Creative Arts, Mrs. Dzifa Gomashie is calling for the arrest of actors in the entertainment industry who expose themselves indiscriminately.

While blaming bad parenting for the nudity in the industry, she urged the law enforcers to act appropriately.

Speaking to the Daily Heritage in an interview, she said the style of parenting today has changed a lot which has allowed parents to accept foreign culture without questioning its value and importance to their children.

She said law enforcers need to start arresting people for indecent exposure at wrong places like they did to the musician, Wisa Greid, to serve as deterrent to others.

She said when parents see their children half naked in music video; they fail to question them about the threats in displaying their body to the world.

Mrs. Gomashie said “If they had a strong foundation it would be very hard for them to be a photocopy of what others are doing.”

She added “Why do they want to be a photocopy of Kim Kardashian or Kylie Jenner when there are intellectual women like Efua Sutherland of blessed memory, Madam Joyce Aryee and also Mrs. Nana Konadu Agyeman Rawlings who never exposed their bodies publicly and are not ashamed to cover their bodies.”

She lamented that the family structure is breaking down and family values are not what they used to be and the only way it can be corrected is to strengthen the family which will have parents playing their role as mandated.

She said the youth should ask “How will my parents feel when they see me half naked on the television, won’t they ask what went wrong?”

According to her, today’s woman should cover up to make men more curious and families should instill values in their children and be involved in their everyday activities.

She noted that it is ones brain power that earns him/her a job and not exposing or showing their body parts, stressing that ladies should not think sex sells because brain power rather sells.

According to her, in the Western world, people don’t watch television and just copy and wondered why Ghanaian youth have decided to follow blindly what they see on social media and television.

The Minister advised Ghanaian youth to make the right choices because whatever decision they make today will follow them tomorrow.