Former Trade Minister Ekow Spio Garbrah is not in a hurry to declare his presidential ambitions any time soon.

He would rather the party focuses its attention on reuniting its ranks and rebuilding after the humiliating defeat it suffered in the 2016 elections.

The John Mahama-led National Democratic Congress was seeking for a historic third term in the fourth republic but was trounced at the polls by the opposition New Patriotic Party.

The party has within two years to elect a flagbearer that will lead the party in the 2020 elections.

There are reports, ex-president John Mahama will not exercise his right to a second term in office after the defeat.

His brother Ibrahim Mahama is reported to have said John Mahama will not contest in 2020 because he has paid his dues for the party and the country.

If the comments by Mr Ibrahim Mahama is anything to go by, it means the party must work hard to find a new leader, competent, popular and marketable enough to win an election in 2020.

Few names are popping up. Goozie Tanoh a member of the party who broke away to form the now defunct Reform Party appeared to have returned from his self-imposed political exile.

He showed his face on December 31, 2016, as a prospective leader of the party in the 2020 election, charging party supporters to reunite and refocus on the ideals of probity and accountability, the values he said, shaped the NDC.

However, Ekow Spio Gabrah, a veteran in the party who contested the flagbearership race against the late president John Mills but lost, still appears to be a formidable force to lead the party in 2020.

Once that is done, he said the party will begin to elect new leaders at the branch, constituency, regional and national levels before electing a flagbearer in two years time.

He said only then will he be ready to give a firm answer as to whether he will contest the 2020 elections as the flagbearer of the party.

He charged all those subtly campaigning for him to refocus their energies in rebuilding the party. 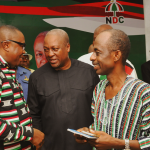