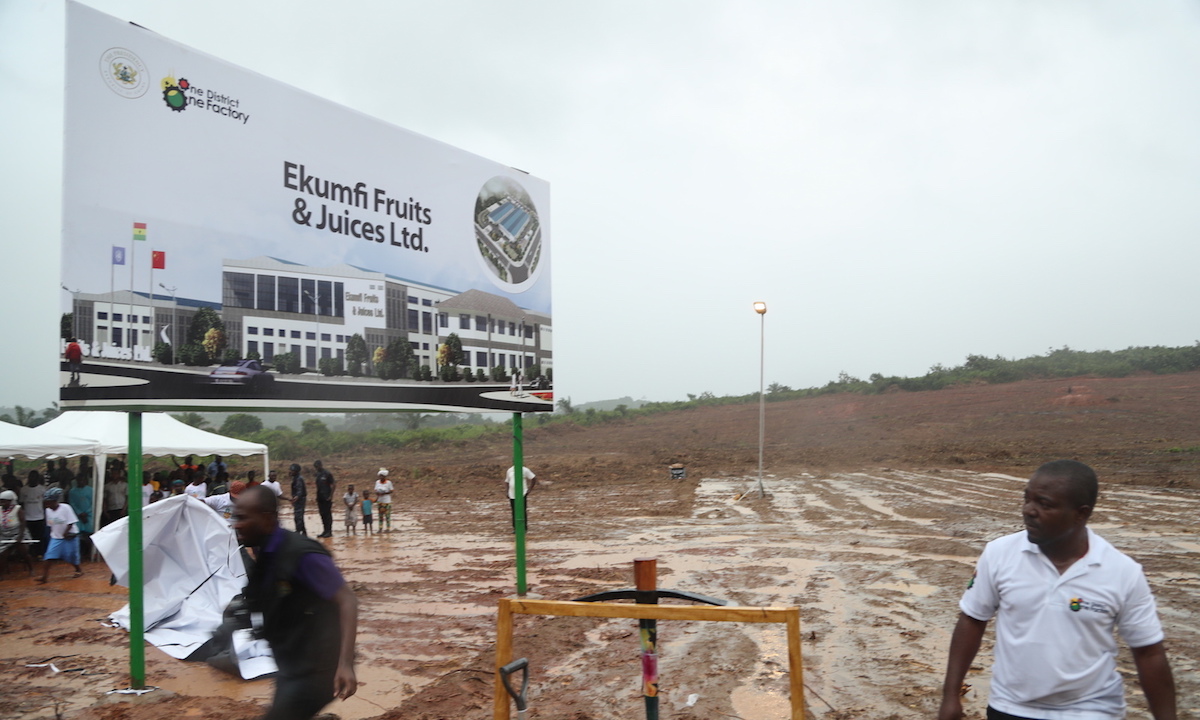 On Saturday, 18th June, 2016, a little over a year ago, I campaigned in the Ajumako/Enyan/Essiam constituency as part of my 5-day campaign tour of the Central Region. I announced at a mini-rally at Ajumako that, if I won the election, a government under my leadership would embark on an industrialisation agenda, with the aim of transforming the structure of the Ghanaian economy from one dependent on the production and export of raw materials to a value-added, industrialised economy.

I indicated that my government, in partnership with the private sector, would establish one factory in each of the 216 districts across the country – 1-District-1-Factory.

As has become the norm over the years, anytime I roll out policies and programmes, it is met with the usual cynical chants of “it cannot be done; he is lying; it is a vote buying gimmick; it is not possible”. 1-District-1-Factory was not spared either. The Ghanaian people, however, were discerning and believed in the vision, and believed it could be done. The culmination of that belief resulted in the decisive victory won by the New Patriotic Party and my modest self in the election of 2016. This victory also meant that for the first time in the history of the 4th Republic, NPP won the Ekumfi seat.

This afternoon’s event, however, ladies and gentlemen, is not about the NPP, neither is it about any other political party. It is about the development of Ghana. During my campaigns, be it in 2008, 2012 or 2016, the cries of the people, whether about the cost of education, bad roads, high cost of living, or low retail sales, came down principally to one thing: we need good jobs with good income. But the truth must be told. Unless we industrialise with the goal of adding significant value to our primary products, we cannot create the necessary numbers of high-paying jobs that will enhance the living standards of the mass of our people. Raw material producing economies do not create prosperity for the masses. The way to that goal, the goal of ensuring access to prosperity, is value addition activities in a transformed and a diversified, modern economy. In other words, the industrial development of our economy.

Another startling example can be found in the figures from the production and export of cocoa. Ghana and Cote d’Ivoire account for more than 60% of the world’s cocoa output. Ghana, for example, earned $2 billion from the sale of cocoa beans in 2015, and Cote d’Ivoire $3.75 billion, amounting, together, to $5.75 billion. And, yet, the chocolate market was worth a little over $100 billion in 2015. It means that the farmers who, through their sweat and toil, produced 60% plus of the world’s cocoa, earned 5.75% of the global value of their activity. This is not right, and should not and cannot continue. There can be no future prosperity for our peoples, in the short, medium or long term, if we continue to maintain economic structures that are dependent on the production and export of raw materials. We must add value to these resources, and we must industrialise.

In recent years, however, our industry has not done well. From a growth rate of 15.1% in 2008, the last year of the government of the outstanding Ghanaian statesman, His Excellency John Agyekum Kufuor, former President of the Republic, growth in industry slumped to 0.8% in 2014, -0.3% in 2015, and further down to -1.4% in 2016. However, as a result of the relative normalisation of the power situation in the country, and the implementation of our business-friendly policies, industry, for the first quarter of 2017, recorded the impressive growth rate of 11.5 percent, the highest sectoral growth in the economy. The policies we have put in place to shift the focus of our economy from taxation to production are beginning to work.

It is for this reason, Nananom, ladies and gentlemen, that we are here, this afternoon, at the commencement of our nation’s revitalised industrialisation drive. Today, I am here to cut the sod for the construction of the Ekumfi Fruits and Juices Co. Ltd., the first factory to be established under the 1-District-1-Factory initiative. This is in fulfilment of the pledge I made to you on Tuesday, 1st November, 2016. As you have heard from the earlier speakers, this project has been well-planned and well-thought through, with the raw materials needed for the successful implementation of this project already present, and an outgrower scheme also in place. With a capacity to process and package about 80 tons of fruits per day, this factory is expected to process a total of about 25,600 tons of fruit per year. A total of 250 persons will be employed at the factory, with over 5,000 jobs, direct and indirect, being created as a result.

The 1-District-1-Factory policy will ensure an even spatial spread of industries. It will promote rapid industrialisation at the district level, driven by strong linkages to agriculture and other natural resource endowments, to create jobs and wealth. I commend the outstanding Minister for Trade and Industry, Alan Kyerematen, who has overall responsibility for the implementation of the policy, and Mrs. Gifty Ohene-Konadu, the hardworking National Co-ordinator of the 1-District-1-Factory programme at the Office of the President, for their collaboration, which has led to today’s event. I am grateful also to the Minister for Agriculture and the Minister for Local Government for their facilitation of the implementation of the project.
A programme implementation framework, which sets the modalities of implementation, has been prepared. To date, the Technical Support Group for the programme has already reviewed over 330 business plans received for the 1-District-1-Factory initiative. The Asempa Budget has allocated an amount of $100 million dollars as Government contribution, either as equity or in kind support, for the establishment of the factories. An additional amount of $340 million has been leveraged from local financial institutions for the programme. Government, in collaboration with the Association of Ghana Industries, has also arranged a Suppliers Credit Facility for $2 billion from China to provide equipment, machinery and other facilities in support of the programme. Thus far, about 59 percent of these applications are from the manufacturing sector, whilst 33 percent are from the agribusiness sector. It is envisaged that 51 districts will start actual implementation of their enterprises by the end of the year, with the potential to generate about 80,000 direct and indirect jobs. It is now clear that this programme is destined to succeed.
Nananom, ladies and gentlemen, in concluding, I wish to appeal for the unalloyed support of every Ghanaian, and the financial organisations for the success of this project. We must banish the spectre of young and able bodied men and women who leave our rural areas for urban areas in search of non-existent jobs. Every district in our country abounds in raw materials, and it is the vision of government to create economic growth poles out of them. It is the only way we can deal effectively with the greatest threat to our future – widespread unemployment amongst our youth. The time has come to bring prosperity to all Ghanaians.
Thank you, and God bless us all and our homeland Ghana, and make her great and strong.