“Contrary to this prophetic admonishment, today it has become difficult to speak against the ills that go on in society. Those in power have disabled us from doing so, by sowing seeds of division amongst us on the basis of ethnicity and Religion. So when people speak against the evils that threaten the stability of our nation, they are labelled as haters of a northerner or Ewe or Akan person or a Muslim or a Christian. I urge you, my brothers and sisters, to speak against evil. It is divine duty.”

These were the words of Alhaji Dr. Mahamudu Bawumia, NPP Running Mate, on Friday when he delivered a lecture at the 9th Annual GMSA Congress of the University of Development Studies at its Tamale Campus on the Topic “The Role of Muslim Youth In Combating Extremism and Radicalism For Political Stability.”

Alhaji Dr. Bawumia urged Muslims and the youth especially to speak against evils like corruption which are the causes of most problems of the society.

“I dare say that in the 21st century, considering the ravages of poverty, disease, ignorance and violence that have plagued the world, the greater urgency is for us to take up the greater mission in fighting against the baser instincts of the soul, which is the cause of the problems of the world. For example, it is estimated that African countries lose about 148 billion dollars every year to corruption. I need not tell you what this amount of money can do for the development of our poor nations. Yet these amounts of money are stashed away in foreign accounts of thieving politicians.

“Corruption is actually a euphemism for theft. The only reason people steal so much money which they cannot spend is greed. It takes great striving to fight against the evil of greed, whose seeds exist in every human being. If we were to eliminate the evil of greed, we will eliminate a lot of the suffering that plagues our nations,” he stated.

The Vice-Presidential candidate of the NPP explained how the menace of corruption is affecting the lives of millions and how it poses a direct threat to the stability of the Nation.

“As young people, you should speak against the evils of corruption. This is because the unemployment situation that faces us today, which has virtually reached epidemic proportions, has a direct relation to corruption. The amount of money that this nation has lost to corruption can only be imagined. These amounts of money could have provided jobs for our teeming youth who roam the streets without jobs. These young men and women who finished university as far back as in 2006, who still do not have jobs.

“A large army of unemployed youth can easily serve as a recruiting ground for twisted ideologies. In Nigeria, Boko Haram never lacks a reserve of young, unemployed and disgruntled youth, who are ever willing engage to in extremism and radicalism even at the peril of their lives. Indeed they perceive themselves as living-dead. So to engage in radicalism and extremism which they are assured guarantees them a quick death and an even quicker entry to paradise is certainly an alluring prospect. We have a duty as Ghanaian Muslims to be on the guard against a similar prospect in Ghana,” he stressed.

Alhaji Bawumia also called on the vast majority of Muslims who are good Muslims to speak up against extremists who have hijacked the Religion of Peace.

“Groups like ISIL, Al-Qaeda or Boko Haram are cowardly criminals hiding behind the cloak of religion to undertake dastardly acts. What they do is evil, pure and simple. Islam in the twenty-first century is at a cross road. It is a sad commentary on the religion of peace that today it is credited with being responsible for all the acts of radicalism, extremism, violence and destabilisation that take place around the world: from ISIL, through Al-Qaeda to Al-Shabab to Boko Haram. While we may meet in places like this and say that what they profess is not the true Islam, the reality is that we have allowed the extremists to hijack the religion of peace; we have allowed them to pervert its values; we have allowed them to define it. It has often been said that it is the silence of the righteous that allows evil to triumph. Let the good Muslims, who practice the Islam of peace speak up. Let our youth shun violence. Let our youth seek the path of knowledge, for it is the path of illumination,” he said. 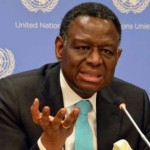