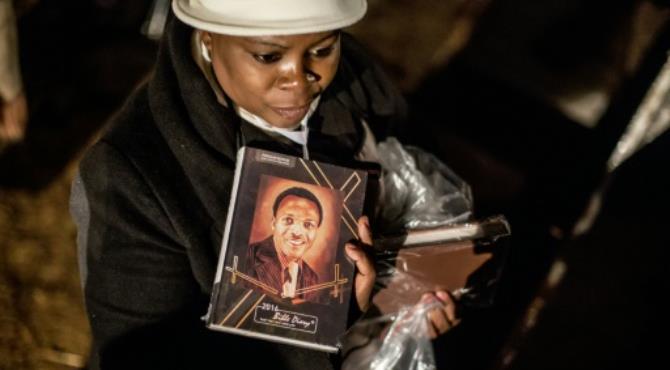 Thohoyandou (South Africa) (AFP) – South African school teacher Benedict Daswa, who was bludgeoned to death for resisting witchcraft, was beatified on Sunday, becoming the first person from the southern African region to undergo the key step toward sainthood.

He was proclaimed “blessed” in an apostolic letter read on behalf of Pope Francis by Italian Cardinal Angelo Amato to some 30,000 people during mass in Tshitanini village, not far from Daswa’s house in South Africa’s northern Limpopo province.

“We grant that the venerable servant of God, Tshimangadzo Samuel Bendict Daswa, layman and family man,… a zealous catechist, all-round educator who gave heroic witness to the gospel, even to the shedding of blood, from now on will be called ‘Blessed’,” said Amato.

The crowd applauded wildly and some blew traditional horns.

Daswa was beaten to death 25 years ago by fellow villagers after he refused to pay a sorcerer who promised to end destructive storms hammering the region.

First stoned by his assailants, Daswa ran to safety in a hut before being found by the mob and beaten dead with a stick.

His murderers then poured boiling water in his ears and nostrils — and all that happened on February 2, 1990 the day the apartheid regime announced it would release anti-apartheid hero Nelson Mandela.

“While his executioners were killing him, Benedict was on his knees praying. He prayed until the last minute of his life,” according to Daswa’s biography read during ceremony.

Virtually unknown when he died, Daswa’s fame grew throughout South Africa’s Catholic community, with villagers starting to commemorate the anniversary of his death. Following the beatification, his feasts shall be celebrated each year on February 1.

Around eight percent of South Africa’s population is Catholic.

Pope Francis, who announced in January that Daswa would be beatified, paid tribute in his regular Sunday address to the faithful in St Peter’s square.

“Today in South Africa, Samuel Benedict Daswa, a father killed in 1990 barely 25 years ago for his faith in the gospel, has been beatified,” the Argentinian pontiff said in Italian.

Traditional performers from the local Venda people dressed in colourful striped outfits sang and danced ahead of the mass.

“It is a unique moment, I feel overwhelmed,” said Tsholanang Koketso, 23, who travelled from the Limpopo provincial capital Polokwane to attend the mass.

“We always hear about saints in other countries but now we (will) have one in South Africa. It’s very nice.”

Father John Finn, who buried Daswa, described him as “a man of incredible generosity.”

“He was always bringing people to hospitals, taking care of children and elders. He had a great value for education.”

The beatification comes less than three months ahead of Pope Francis’s first visit to Africa in a push to connect with the burgeoning Catholic population across the continent.

The Pontiff will be travelling to Kenya, Uganda and the Central African Republic late in November.

In Uganda, Francis will commemorate the canonisation by pope Paul VI in 1964 of the first African saints — 22 young people killed in 1878 on the orders of the local ruler because they refused to renounce their Christian faith.