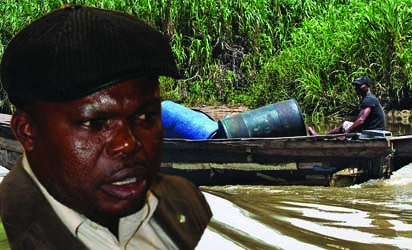 SECURITY operatives hunting for the militants who bombed oil pipelines in Delta State have invaded the riverine Bolowoh community in Ondo State, in search of a former commander of the Movement for the Emancipation of the Niger Delta, MEND, Bibopre Ajube, aka Shoot-At-Sight.

Meanwhile, former Commander of MEND, Victor Ebikabowei Ben, alias ‘General’ Boyloaf, has dismissed the recent statement by the JTF, in the Niger Delta that it would hold community leaders responsible for attacks by militants on oil facilities in their areas.

Boyloaf, in an interview with Vanguard, said, “Truth is, the JTF cannot hold any community leader responsible for any attack that has taken place in the past or in the future, and they know it,  because the community leaders are not empowered to secure or watch over the pipelines.”

This came as a non-governmental organisation, the Ijaw People Development Initiative, IPDI, cried out yesterday to the international community that the Ijaw nation was under military siege.

National president of the organisation, Austin Ozobo, who called for the intervention of the international community told Vanguard on phone: “Thousands of residents have deserted their communities in Gbaramatu Kingdom and Bolowoh community, Ondo State, the hometown of former militant leader, Bibopre Ajube, aka Shoot-At-Sight, because of Monday’s invasion of the community.

“Movement is restricted in the area, cost of food is high and some persons are trapped,” Ozobo said.

Also, the Committee for Rural Development, Warri, Delta State, claimed, yesterday, that security operatives searching for perpetrators of the last pipeline bombing in the state had issued an ultimatum to Ijaw residents living in Sandfield I and 2, Ogbogbene, int Warri over side, Warri South-West Local Government Area of the state, to vacate the areas.

President of the Committee, Mr. Asiayei Enaibo, in a statement, said: “The issue of JTF asking Ijaw communities, especially Sandfield I and 2, Ogbogbene, at Warri over side, because they are in search of Tompolo, is a sign of misdirected action.”

A military source, however, denied that the task force issued a quit notice to Ijaw communities, saying people were just blowing the military operation out of proportion.

Enaibo, who said the residents were already deserting the community,  added, “The JTF should ensure professionalism in their operations, as they are known to be perfect in intelligence gathering. An ultimatum to Ijaw communities to pack out on January 28, is a declaration of war against Ijaw nation by President Muhammadu Buhari’s government.”

Security operatives, who stormed Ondo State, were reportedly working on intelligence that Ajube took part in the Delta pipeline bombing, which the ex-militant leader denied.

The details were still sketchy, yesterday, as the JTF in the Niger Delta was keeping its current operation in Ondo State secret, but our source said, “Ajube was not at home when they stormed his home.”

Our source said, “Soldiers narrowly missed arresting him, he escaped before they could seize him. They seemed to be targeting people close to Tompolo and have made more arrests. Ajube is one of the top Tompolo generals that accepted amnesty.

“We do not have the identities of the people they have arrested so far and the purpose of the army invasion,” he added.

Last week, the Arogbo Ijaw National Front raised alarm that the Nigerian Army was exacerbating inter-ethnic tensions and other forms of violence in the riverine parts of Ondo State with an ill-advised manhunt for the founder of a vigilante group.

In a statement, its president, James Akubirisei, accused the military of declaring an unwarranted search for Ajube, saying that security agents accused members of a local anti-crime group, Gallery Security Services, founded by Ajube, abandoned their duty posts to carry out the Delta attacks.

Meanwhile, the Okerenkoko Federated Communities have advised the JTF not to bring reproach on the military through indiscriminate arrests of Gbaramatu people over the recent crude oil and gas pipelines bombing in the state.

Secretary, Okerenkoko Federated Communities, Ernest Bebenimibo, in a statement, said, “I want to call on the security agency to stop harassing, arresting and detaining Okerenkoko and Gbaramatu youths without cogent reasons after the recent pipeline bombardment which was roundly condemned by us.”

However, General Boyloaf, in an interview with Vanguard, was asked:

How do you see the present travail of Tompolo concerning a bench warrant by a court for his arrest and insinuation that he was party to the last pipeline bombing in Delta State?

What we have to do is to place events in their proper prospective to avoid over heating the polity and causing unnecessary friction. Most of us have our private businesses and in the course of doing business, we interact on a corporate platform with other businesses and institutions of the government.

In business, there may be misunderstanding, claims and counter claims and I believe that there are ways and means to resolve whatever differences that occur in the process of doing legitimate business. They should explore that process.

A group of ex-militants which said ex-President Jonathan did not grant them amnesty had claimed responsibility, saying that they struck to draw attention to their demand. Do you think they are justified?

The late President Umaru Yar’Ádua, may God bless his soul, granted the amnesty. It was continued by President Goodluck Jonathan and President Buhari is sustaining it. Those who claimed responsibility should open up. They should show their faces so that we will know  if they are beneficiaries of the amnesty or not.

It is not enough to make bogus statements that you cannot substantiate. Anyone who is under amnesty has no justification to blow pipelines. If you do so and they identify you, the normal thing is that you automatically lose the benefits of the amnesty and they treat you as a common criminal.

JTF had said it would hold community leaders responsible for future attacks in their domains. What is your opinion on this?

I can recall that in the run- up to the last presidential election, mindful of all the threats and tension in the country at the time, government awarded pipeline protection contracts to community based entities. However, uptil now, the government has not paid and most of these community entities are now indebted to their banks that provided funds for the execution of the contracts.

Now, the government is still expecting them to risk their lives to protect the pipelines.  The best the community can do is to provide information to the JTF and they can only do this in a discreet manner or else there will be consequences. It is a matter of life and death.

What is your advice to Tompolo, to submit himself for arrest or continue to defy the law by not coming out?

I really have no advice, other than to say that all responsible adults should be able to discern and count their teeth with their tongues.

What is your advice to militants in N Delta regarding the Buhari regime?

First thing is that they should remember that it was not President Jonathan that granted the amnesty, so the future of the amnesty is not tied to the tribe of the occupant of Aso Villa. With that in mind, the end of Jonathan administration is not necessarily the end of the amnesty.

The sad part is that Jonathan’s administration, through Kingsley Kuku, mismanaged the programme. I cannot fully understand the political agenda and direction of the Buhari administration on the amnesty programme. However, the Coordinator, General Boroh, is doing his best.