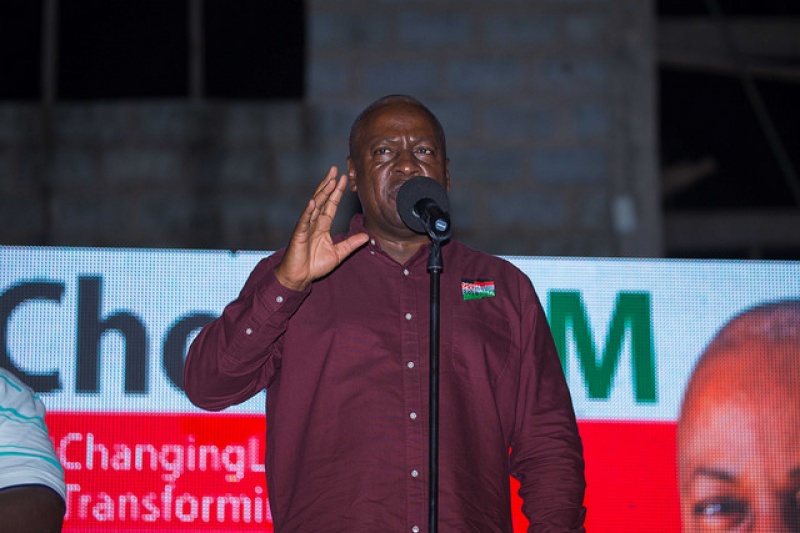 President John Mahama has announced government’s plan to make the Shai Osudoku area a major agri-business zone in the next four years.

He said government hopes to invest in factories that will process farm produce like mangoes, water melons and other fruits that the area grows on a large scale.

This is part of the National Democratic Congress’ (NDC’s) green revolution policy stated in its 2016 manifesto.

The President stated these when he interacted with the Chiefs and people of Shai Osudoku as part of his campaign tour of the Greater Accra region.

Shai Osudoku is in the Greater Accra region. Most residents are farmers who grow fruits and other vegetables on a large scale.

In the wake of the green revolution it has become necessary for government to put up factories that will process these produce for ready market and for export. Whilst approaching the town, one is met with large mango plantations and rice farms.

Interacting with the people, President Mahama acknowledged their massive support for the NDC indicating that, government will ensure that it gets its fair share of national development.

Aside from schools and some GETFUND facilities, President Mahama recently inaugurated an ultra-modern hospital for the Shai Osudoku district.

President Mahama, hinted of plans to expand the irrigation project in the district to attract young people to go into rice farming.

He said one of the Farmer Service Centres to be built across the country will be situated in the district. Under the centre, farmers will be offered quality seedlings, technical services and improved farming methods.

As stated in the NDC’s manifesto to refurbish all factories that were built during the Nkrumah regime President Mahama, said there are plans to revamp the Asutsuare sugar factory.

The factory which has been dormant for sometime now, will be revived to create jobs for the youth.

On roads, President Mahama mentioned the Dorimu to Dodowa road which is under construction.

Currently, the contractor is working on the culverts. He said the Asutsuare to Akuse road has been placed under the Eastern corridor road project and will be constructed in due course.

The President however assured them that the stretch will in the interim be put in a motorable way for easy accessibility.