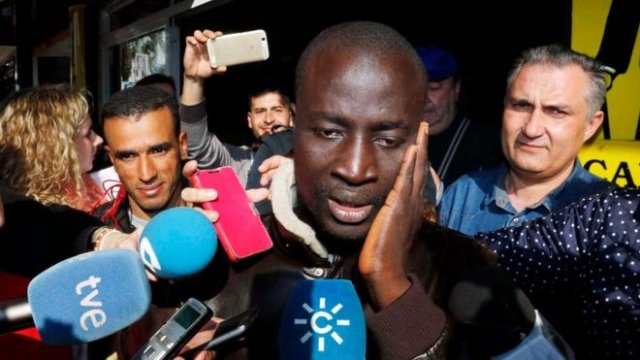 The man, named Ngagne, travelled from Morocco to Spain in 2007.

Ngagne told one Spanish newspaper that he and his wife often did not have even €5 to last the day.

The 35-year-old and his wife were rescued when they made the journey by boat in 2007, and taken to the island of Tenerife. They now live in Roquetas de Mar, which is on Spain’s south coast.

“There were 65 people on that boat,” he told the La Voz de Almeria newspaper (in Spanish). “I want to give thanks to Spaniards and the Spanish government for rescuing me when I was in the sea.”

Ngagne told reporters he had recently lost his job as a vegetable picker in greenhouses near the town of Almeria.

An 18-year-old woman who moved to Spain from Morocco at the age of four was also among those in the town celebrating lottery success. “We will be able to do a lot of things – everything we want,” Imanes Naamane told La Voz de Almeria. “We were in real trouble before.”

Roquetas de Mar has an unemployment rate of more than 30% – higher than the national average of 21% – and tourism and agriculture are the main industries.

Unlike many other lotteries, there is no single jackpot in El Gordo. Instead the winnings are distributed among thousands of people.

El Gordo is the world’s biggest Christmas lottery, and the live televised draw grips the nation.