According to him, anyone who votes against the 2016 Presidential candidate of the National Democratic Congress (NDC) in the upcoming polls does not have the country’s interest at heart.

Nana Koo Taa, as he is popularly known made this known Saturday October 1, 2016 when the Local Government Minister, Collins Dauda and Western Regional Minister Paul Evans Aidoo paid a courtesy call on him at his Palace as part of the National Sanitation Day exercise.

Nana Adu Kwesi II, who endorsed President Mahama and the NDC, explained that the Mahama led government has embarked on several development projects in Sefwi Asawinso including fixing their deplorable roads.

“President Mahama and the NDC have really developed our town so much that I can’t afford to vote against him. I won’t speak for my people but I will personally support him with prayers for him to win once again.

“I pray that in this year’s election, NDC government wins again so that he continues developing my town for me. I really thank God for him. Those who wish that he is voted out can do so to their own detriment. But all I can say is that he (Mahama) will win again” he said.

He however insists that he is not engaging in politics but only appreciating the good works of the NDC government.

He charged the Local Government Minister and all members in the NDC to fight and retain President Mahama in power.

He also appealed to government to make Sefwi Asawinso a district, warning that if the NDC government fails to deliver he will face them boot for boot. 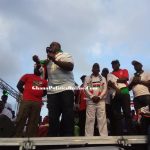