Brother to Samia Nkrumah, Dr Sekou Nkrumah, is of the belief that his sister does not really understand the dynamics of Ghanaian politics.

According to him, Ms Nkrumah’s agenda is “more of self-seeking”, and “trying to fit into her own personal ambition.”

“My problem with Samia really is…I’m not too sure what her politics is all about but it seems to be more self-seeking and an agenda for the cause she believes in…I think everything was about her…,” he said.

Speaking from Florida in the United States of America in reaction to his sister’s defeat in the CPP’s presidential election, Dr Nkrumah advised his sister to humble herself and work with the leadership of the Convention Peoples Party (CPP) in order to improve the party’s fortunes in the 2016 elections.

“Growing up as kids, one thing I admired about Samia was her humility and I don’t know where that has gone to,” he said.

Following her defeat at the party’s congress, Ms Nkrumah accused Mr Ivor Greenstreet of vote buying, saying, “GhȻ200, GhȻ300, GhȻ 500, GhȻ1000, GhȻ3000 were given to delegates during our congress on Saturday.”

But responding to his sister’s comments, Dr Nkrumah questioned the state of maturity of his sister in politics.

“I think she is not handling this situation well…I mean why talk about money, and so on, people buying votes and so on. I think this should be internal…they can sort that out between themselves. My advice is that she should humble herself and work with the present leadership now,” he said.

Dr Nkrumah was also of the belief that his sister rushed into the political landscape in Ghana.

He said, “She came to this party in 2008 and quickly jumped into the political landscape without really understanding the dynamics of politics in Ghana…but as she settled in I expected her to understand what was going on.”

He also said her lack of achievement as chairman of the party could partly be blamed for her defeat.

“She became the chairman of the party but then what did she achieve for the party under her leadership…I mean…nothing really has changed. I think it was also a bad taste being an MP and you become a party chairman and now you want to become a presidential candidate.”

Dr Nkrumah also had an advice for the party’s flagbearer, Mr Greenstreet, saying “winning the presidency is way beyond the CPP but I’m sure if he walks towards building the party from the grassroots level and focus on winning parliamentary.”

In his opinion, it is not possible for the CPP to win the presidency in 2016.

“But winning the presidency in 2016 I think it is unrealistic. Samia made that mistake and I hope Ivor would not make that mistake too,” he said.
LarMwP.dpuf 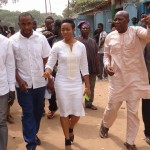 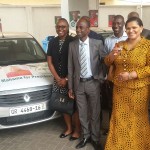