A Deputy Communications Director of the Convention People’s Party (CPP) Osei Kofi has accused former chairperson of the party Samia Nkrumah of collapsing the party founded by her father.

According to him, many key people are quitting the CPP as a result of the intransigent posture of the former member of parliament.

The accusation comes on the back of the decision of the party’s 2012 flagbearer Dr. Abu Sakara to quit and go independent in the November polls. Sakara’s exit is reminiscent of the departure of Dr. Paa Kwesi Nduom, who also left the party to form his own, the Progressive People’s Party (PPP), after leading the CPP in an unsuccessful campaign to annex the presidency in 2008.

Speaking to Fiifi Banson on Kasapa FM Wednesday, Kofi who speaks for the party in the Ashanti region said Samia has become a dictator in the CPP.

“She is responsible for what is happening in the party. Nduom left because of her attitude and now Sakara is also going. She never listens to anyone. She makes it appear as though she has the best strategy yet the party keeps going down. She is collapsing the CPP.

“Sakara suggested that we contribute monies to build the party and she opposed that idea but came up with nothing to help the party rebuild. We are giving her some days to rethink her stance on matters in the party else we will have to take a decision and go with Sakara,” he stated.

Meanwhile, Samia is campaigning to lead the party as flagbearer in the November 7 presidential and parliamentary polls. 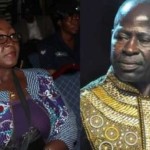