The motivational speaker told his congregation at the International Central Gospel Church (ICGC) on Sunday February 14 that he shudders when he reads certain research publications which support same-sex marriage, and, therefore, asked Christians to be wary of such research, since they (Christians) must be the light of the “dark” world.

“Let’s not disappoint the world; our calling is to radiate God….light rules over darkness…” the ICGC Overseer said, lamenting: “We have to be very confident in overcoming the darkness of this world because the more I read about what’s going on in the world, the more I say to myself: ‘The world has lost its way.’”

“It [the world] talks in very high, sophisticated language and very polished words and they throw out all kinds of big-sounding words that we haven’t heard before and they say: ‘This research said that, and that research said this and this analysis said that.’ And when they end up with what they say the research said, you’ll say: ‘So, with all the research, this is what you ended up with? That a man can become a woman and a woman can become a man and then they marry? That a man can marry a man and a woman can marry a woman?”

“Let me tell you: No matter what research proves that, common sense – I’m not even talking Bible, leave the Bible out, common sense, the sense that is common – tells you that a man marrying a man doesn’t make sense. It doesn’t. I mean I don’t know by what sense you can ever say: ‘Oh that is acceptable, let people love what they want.’ So, if you love a stone you’ll marry a stone?” Pastor Otabil asked. 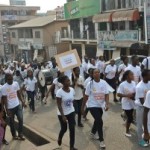