The National Youth Organiser of the Progressive Peoples Party Divine Nkrumah, says the abuse of social media is very dangerous to the stability of the country especially as we enter into the general elections. Divine Nkrumah has called on the National Media Commission to as matter urgency step up their game in order to control the kind of information that is churned out into the public domain. He was speaking to ATV news to rubbish the news making rounds on social media platforms that Dr. Nduom has rejected Salinko as a parliamentary candidate to run on the ticket of the PPP. “ Salinko is far better than Akua Donkor and Kwame Dzokoto PPP have no problem with him” he noted.

“Dr. Nduom never called a press confab as was published by the website and so I don’t know their source of the information they published”

According to the Youth Organizer the PPP has tried to get in touch with publishers of screwlife.com but to no avail. “We’ve tried to contact them but even on their website they don’t have an address or telephone number”

He described social media as a very good tool for development but its’ abuse is security threat to the stability of the country.

“We are in the election year and spreading rumors on social medial can be deadly. Somebody could even spread rumours of planting bomb somewhere during these times and cause fear and panic. That doesn’t auger well for our stability”.

Divine Nkrumah says its pathetic for Ghanaians to seem to have a problem with Salinko running for political office because of his career as a comedian. He cited Maame Dokono, Abeiku Santana and Kwame Dzokoto as examples of comedians to run for political office.

“Parliamentarians’ duties are not extensions of their professions, if Salinko is what the people want then so be it. The PPP don’t have any problem with Salinkos’ candidature. Even Akua Donkor that people think is not serious is vying for presidency”
He called on media Commission to ensure that the media practitioners exercise professionalism in their reportage. Salinko the comedian in real life is known as Abraham Davies. He is campaigning on the ticket of the PPP as parliamentary candidate for Atwima Kwanwoma constituency in the Ashanti Region. 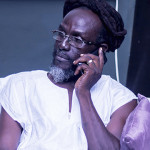