The National Communications Authority (NCA) said, it has no intention of blocking the sale of Vodafone Group’s 70% shares in Vodafone Ghana to Telecel Group.

In a tweeted press release headlined NCA HAS NOT BLOCKED SALE OF VODAFONE GHANA’S OPERATIONS TO TELECEL GROUP the NCA said Vodafone Group’s application to transfer its majority shares to Telecel did not meet the regulatory threshold for the approval to be granted.

It said, “In January 2022, the NCA received an application for the transfer of 70% majority shares in Ghana Telecommunications Company Limited (Vodafone Ghana) from Vodafone International Holdings B.V. to the Telecel Group. In accordance with due process, the Authority evaluated the application on various criteria and engaged both Vodafone and Telecel Group. After a critical regulatory review and evaluation, the NCA concluded that the request did not meet the regulatory threshold for approval to be granted”.

As part of its response to the claims of blocking the sales, NCA indicated that the reports by Techgh24, citing highly placed sources, that government had other plans for when Vodafone leaves the country by close of this year when telecom operators will go for the renewal of their licenses is false.

NCA said in rejecting the deal, it was only keeping with its regulatory framework and international best practice.

However, very often when NCA takes a regulatory decision, it usually states category which provisions of the law or regulations back its decisions. But in this case, it failed to state the specific regulations that were flouted by the deal, and or informed its decision to stop the sale.

It is also not clear if NCA made official communication to Vodafone Group and Telecel about its final decision on the deal before today, August 2, 2022. [We are still running checks on that]. 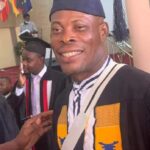