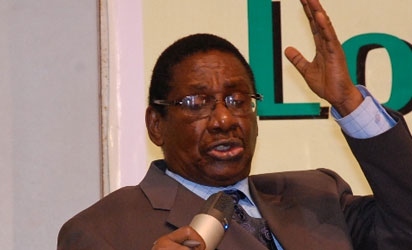 IGBO youths on the banner of Igbo Youths Movement, IYM and South East Democratic Coalition, SEDC, have flayed legal icon, Professor Itse Sagay, SAN over his comments that those clamouring for Biafra are doing so in order to intimidate President Muhammadu Buhari into giving the Igbo positions they don’t deserve having rigged themselves out of contention in the present administration. According to media reports, Sagay said the Igbo occupied 50 per cent of Federal positions under former President Goodluck Jonathan, and did everything to get him re-elected to no avail including rigging and as such were not deserving of the positions they are seeking from President Buhari.

Describing the comments as ”Blanket Abuse of the Igbo Nation”, the Igbo youths said they were shocked by ”the unprovoked vituperations from Itse Sagay. The horrible vitriolic based on lies and ethnic prejudice is probably designed to endear Sagay to Aso Villa, and also deepen ethnic hatred in the land.”

In a statement by Evangelist Elliot Uko, IYM founder, they said it was not true Igbo leaders were sponsoring the Biafra agitation rather, ”the Biafra agitators are more angry with Igbo leaders than with any one else. The younger generation of the oppressed people of Eastern Nigeria are merely reacting to decades of oppression. The Biafra agitation came about as a result of the continued refusal of a powerful group in Nigeria to enthrone true federalism which has been agreed by Nigerians at all the national conferences ever held in Nigeria.

“That Sagay claims ignorance about the choking and suffocating effects of the current unworkable unitary structure is shocking. That he manufactures a reason (accommodation into Buhari’s dinner table) for the Biafra agitation without bothering to hear from IPOB, MASSOB and other youth groups behind the agitation is idiotic.”

Uko continued: ”He is giving the public the impression he belongs to the group of Nigerians who believe they will shine only when Ndigbo are shoved out of the way (i.e. 1966-1970). He accused Ndigbo of ‘rigging and opportunism and lack of principles’. Such blanket abuse and the unguided generalization is not a character trait the highly respected Itsekiri Nation are known for, that leaves everybody wondering what could really be the motive behind the general insults on the Igbo race by Sagay.

”Everybody is at pains, to really comprehend why it is so important to Sagay that Ndigbo are placed in his own words “out of contention in the present administration”. Is he intimidated, mushroomed and out-classed by Igbo intellectuals to the extent he believes, he will only get noticed when Ndigbo are sidelined completely?

“His blanket insult on the mighty Igbo race, laced with outright falsehood and insinuation is unwarranted and unfortunate. He probably believes that the government he adores have struck so much fear and terror into the hearts of Nigerians, that nobody would point out his folly to him, in that case he only succeeded in disappointing Nigerians and diminishing himself.

“We would like to use this opportunity to remind General Buhari that Nigerians and the international community are closely monitoring the goings on in the indefinite detention culture that has made a comeback to our polity after three decades. Of special interest is the Nnamdi Kanu and Sheik Zakzaky imbroglio.

”As the Islamic Republic of Iran, the Sultan led JIN and other Muslim groups put pressure for the release of Sheik Zakzaky, Nigerians are closely watching between Kanu, whose unconditional release has been ordered by two courts in the land and the Sheik, and who will be first released by General Buhari.

”His decision on the two cases will go a long way in confirming whether he is the unbiased messiah his supporters claim he is or the sectional warrior, his opponents claim he is. The weeks and months ahead will confirm his place in history.”