The Minister of Roads and Highways, Alhaji Inusah Fuseini, has warned under-performing cocoa road contractors to speed up work or risk the termination of their contracts.

The Minister expressed worry about the incessant delay by some contractors working on some of the cocoa growing community roads, saying the Dunkwa Town roads and the Obuasi Junction to Dunkwa roads are woefully behind schedule.

Alhaji Fuseini gave the warning when officials from the road ministry and management of COCOBOD and its Chief Executive, Dr Stephen Opuni, inspected some of cocoa roads in the Central and Ashanti regions to find out the level of work done.

Dr Opuni had earlier inspected some of the cocoa roads in the Ashanti Region and warned under-performing contractors to speed up work.

The Minister said there are no justifiable reasons for the delay, with some of the contractors confessing reporting to work five months after they received advance mobilisation.

He commended contractors who have worked satisfactorily and urged those lagging behind to double their efforts to meet the required deadline.

Mr Opuni said the project is vital to the carting of cocoa and other foodstuff from the farming communities to the commercial centres.

He said the construction of the roads will reduce the perennial post–harvest losses and the frequent breakdown of vehicles transporting goods.

The roads are part of those the COCOBOD had earmarked to rehabilitate at a cost of 150 million dollars.

The Kasoa bypass, Mankessim-Abura Dunkwa, Assin-Twifo Praso, Essiam Town roads and the Breman Asikuma-Amanfopong road are but a few of the ongoing works to improve roads in the Central Region. 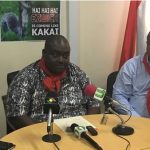