The General Secretary of the Christian Council of Ghana, Rev Dr Kwabena Opuni- Frimpong has described the President’s campaign to create a Ghana beyond aid as cheap populist talk.

According to him, Ghana still needs aid and that people who campaign against development aid to Ghana appear not to know what the reality looks like.

Rev Opuni-Frimpong noted that donor countries had to monitor case by case to see that the money was well spent to have their money’s worth.
He said such populist campaign undermines operations of nongovernmental organisations and other institutions that do business with the donor agencies.

Rev Dr Samuel Asenso Bediako, a former pastor of the Presbyterian Church now based in the United States, also described the President’s campaign as premature and unnecessary looking at the country’s current economic situation.

“We need more than sweet political promises, rambling narratives and confusing signals, no matter how amusing, we need real change and the nation needs a new birth.

“We need political leaders who are ready to confront our challenges with practical, tough but prudent solutions, walk their talk, will always be on the side of the people who are committed, not in the cradle of those who will eventually stab the masses in the back after getting their votes.

“There are many Ghanaians still jobless, the face of poverty is still on our streets, there are still no accountability for rights violators, there are still multiple standards of justice and people still cynical about our justice system because of political manipulations and our corrupt officials are called heroes by their political friends,” Rev Bediako lamented.

He advised politicians in Africa to stop their cheap political rhetoric about development aid to Africa stressing that the President should focus on building on what he inherited from his predecessors and clear from his government arrogant officials.

Rev Bediako slammed politicians who fantasize that they are omnipotent appointees who think public service is a private trust fund.

“These are the issues the President should concern himself with, after 10 months the demagogic promises seem to have given way to compromise, reversals and even betrayal over time.

“These are the issues we must dispassionately tackle not cheap populist narratives and assurances,” Rev Bediako stressed. 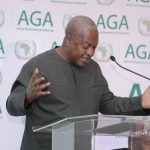