Klottey Korle constituency executives of the New Patriotic Party (NPP) say they are unaware of any pending parliamentary primary there.

Media reports earlier suggested that there will be a rerun of the primary in the constituency as a result of the suit filed by Philip Addison, and another aspirant who boycotted the earlier primary after describing it as illegal.

But some executives of the party in the constituency say media reports of the court ordering a re-run of the primary held last August are untrue.

“As of now the parliamentary candidate is Nii Noi and the case is in court. The court didn’t tell us that we should go for a re-run. That’s the propaganda the opponents are using. There is no re-run as at now because the national party did not give any directive that there should be another election.”

“There is no letter like that because if there if there is a re-run, the constituency would have a letter informing us. Nobody has the court judgment that we should go for a rerun.” he noted.

Although Mr. Philip Addison earlier filed a petition demanding a re-run of polls in the constituency, the court’s ruling which appears unclear seem to be creating more confusion with some executives of the constituency mostly divided either for or against one of the candidates. 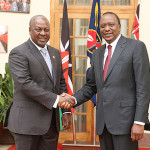