A former deputy Minister for Communication in the erstwhile Mahama administration, Felix Ofosu Kwakye has debunked reports that the GH¢2.5 million accrued from the pay cuts initiated by his boss, former President John Dramani Mahama in 2013 cannot be accounted for.

Controversy erupted when a Deputy Controller and Accountant in charge of Financial Management Services, Mr Kwesi Owusu, told the Public Accounts Committee of Parliament (PAC) that the said money could not be found because it had been transferred into another account following a directive by former Chief of Staff, Julius Debrah.

Mr. Owusu said “…As to what they have done with the money that one is not an area for us to answer because it was not statutory deductions which we should have taken and then say pay to SSNIT or pay to GRA. This one was a voluntary deduction so when you deduct, you give it to the one who asked you to deduct on his behalf.”
play

However, on his facebook page, Felix Ofosu Kwakye said the money has been put to the use for which it had been raised, and any claim that it cannot be accounted for is misleading.

He explained that, “A total of GHS2,190,718.30 had been deducted as of the end of December,2016. A total of GHS 2,130,718.30 had been paid to contractors who had either completed or were working on the CHPS compounds. Regarding the CHPS compounds themselves, a total of five had been completed at Gympokrom and Kwame Prakrom in the Upper Denkyira East District, Ada East in Greater Accra, Nkwanta Number 1 & 2 in the Western Region and Abontonso in the Afram Plains North District of the Eastern Region.
play

“Another five were almost completed at Faso Bator and Supon in the Afram Plains North District as well as Dome, Gadokope and Samankwe in the Afram Plains South District.“
Another one was nearing completion at Tetegu Old Town in the Greater Accra Region. The last one was at foundation level at Ho Zongo as of the time we were leaving office,” the former deputy minister stated. 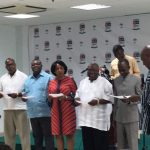