An Accra high court has ordered a re-run of the disputed New Patriotic Party (NPP) parliamentary primary for the Klottey Korle constituency in Accra.

The order followed the dismissal of an application filed by the NPP parliamentary candidate, Valentino Nii Noi Nortey, which sought to set aside a default judgement.

It would be recalled that the court had earlier entered a default judgement for the re-run of the August 2 polls, but the NPP, through its lawyers, moved an application to set aside the ruling.

However, die court, presided over by Justice Patience Mills Tetteh, upheld its earlier decision that the election must be re-run.

The judge held that the default judgement was entered before Nii Noi joined the suit.

Earlier, Frank Davis, lawyer for the plaintiffs – Philip Addison and Nii Adjei Tawiah – said Nii Noi was not a party to the suit and that the reliefs sought were only directed to the NPP because it was the party that organized the election.

Mr. Addison and Nii Adjei dragged the party to the high court, demanding the annulment of the August 2 poll, which elected Valenti¬no Nii Noi as the parliamentary candidate of die constituency.

According to the writ, the rules and regulations required the Parliamentary Elections Committee to receive and keep the constituency register until same was submitted to the Electoral Commission.

The plaintiffs alleged that the duly certified register was inspected by all the aspirants and same was kept by the Secretary of the Committee, adding that that was never made available to the EC because August 2, 2015 was not the agreed date for the conduct of the poll.

In the view of the plaintiffs, the persons who organized the August 2, 2015 election procured a totally different voter register for use on that day.

The infraction, the complainants said, allowed persons, whose names were not on the duly certified voter register, to cast their ballot. 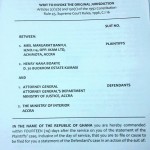