Former President John Agyekum Kufour has spoken against corruption and advised public office holders to be careful when they are given any mandate.

He said once someone gets into public office they feel they have the power and “this power attracts in ways that if the person is not careful, he would end up in disgrace.”

Speaking at the Dream Oval Thought Series Thursday, Mr Kufour narrated the famous story of Adam and Eve in the Garden of Eden in defense of his famous ‘corruption is as old as Adam’ comment.

He strongly defended his anti-corruption stance duringhis tenure as president.
Mr Kufuor explained that his ‘corruption is as old as Adam’ comment was taken out of context and given a different twist.

According to him, he cautioned his ministers in his administration that political power came with a lot of corrupt temptations and they should beware.

“When someone tells you corruption is from Adam, that person is not endorsing corruption, no, they might be advising you to go back to history and see how your forebear Adam fell so you become wiser so you don’t fall,” he said.

He said his comment was not to encourage public officials to continue with the corrupt practices.

“Kufuor never did that, Kufuor was only trying to advise public office holders to be careful because the temptations are strewn all over,” he said.

He said Adam’s failure was a daily reminder for him as he could not pretend that he was incorruptible as a human being.

“I didn’t pretend I could easily overcome it but I kept reminding myself how others fell. That is what saved me,” he disclosed.

Organizers say they want those who have been former leaders to share their experiences so as to transfer their knowledge to the younger generation.

So far the Series has hosted veteran Ghanaian musician, Egya Koo Nimo to speak about ‘palm wine’ music, Professor Azumah Nelson, the legendary boxer; footballer Kwame Ayew and other people from all walks of life. 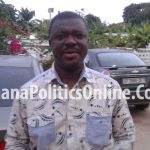